COMMUNITY attitudes to genetically modified organisms (GMOs) have “settled”, according to the latest survey by the Office of Gene Technology Regulator, mirroring very closely the results from a 2015 study.

The regulator said this did not mean that attitudes won’t change rapidly if they were influenced by some external factors (for example, media coverage), but it did suggest that in the absence of such factors attitude changes would not be major.

Between the 2015 survey and this year’s survey, there was little movement in awareness and understanding of GM issues and concerns.

Those strongly opposed to GMOs are about 13 per cent of the population across different measures, and these respondents stood out as having more extreme attitudes to food and agriculture than any other group, as well as low overall trust.

Support for GMOs is more varied and cannot be given just one figure because it is so often conditional, based on regulation and safety being ensured, and the type of modification and its purpose.

“Those who supported the growing of GM crops…and those who were opposed to it were even at 36pc, with 28pc unsure.”

For example, there is a wide difference in support for GMOs in medical (63pc), industrial (55pc), environmental (54pc) and food and crops (38pc).

Those who supported the growing of GM crops in their state or territory and those who were opposed to it were even at 36pc, and with 28pc unsure. The ‘don’t know’ or ‘unsure’ ratings were high across most questions.

Segmenting the audience into four groups based on their support for GM foods, almost half the respondents were open to the production of GM food as long as regulations were in place to make sure it was safe.

About a quarter were against the production of food this way until the science could prove it was safe. 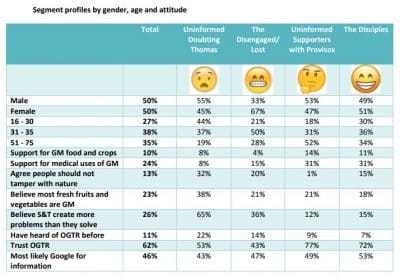