Bait before they mate – now’s the time to tackle snails

STIMULATED by moisture, snails are becoming active after summer dormancy, presenting the opportunity for growers to commence baiting now in an effort to reduce populations of the crop pests. 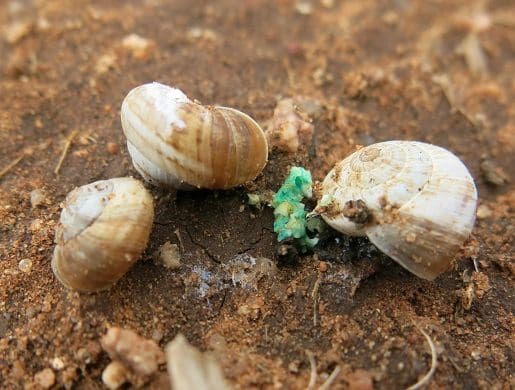 Baiting is most effective when snails are actively feeding but before they commence mating and egg-laying, according to experts supported by the Grains Research and Development Corporation (GRDC).

“Even though conditions have been mostly dry to date this year, snails have been observed becoming mobile in response to light rain events and overnight dews in parts of South Australia since March,” Mrs Brodie said.

“Baiting programs should target snails as soon as they become active and before reproduction – therefore, now is the time to act.”

Trials conducted over the past three years by SARDI as part of a GRDC research investment have shown that the reproductive organs of snails begin to mature from late March onwards, and then most reproductive activity occurs from late April to July.

Mrs Brodie said baits were not inherently attractive to snails, therefore baiting performance relied on snail activity which determined the chance of snails encountering and consuming bait pellets. At this time of year, even light showers or overnight dews were sufficient to stimulate movement.

“Ideal conditions for baiting are periods when the soil is likely to remain moist for several days. Baiting can be carried out anytime snails are active. However, current research is supporting autumn as the best time to bait for several reasons,” she said.

“Secondly, SARDI laboratory trials have found higher efficacy (against both snails and slugs) when baits are applied under warmer temperatures within the range we tested (10-22 degrees Celsius). And finally, baiting is most efficient when there is less ground cover and alternative food – the presence of crop plants and weeds at later times during the year reduces bait encounter.”

To ensure snails are likely to encounter pellets, use the appropriate rate according to the label.

Snail and slug baiting guidelines are available at http://www.pir.sa.gov.au/__data/assets/pdf_file/0004/286735/Snail_and_slug_baiting_guidelines.pdf.

“The higher rates may be needed in heavily infested areas, such as perimeters, fence lines or calcareous outcrops,” Mrs Brodie said.

“Where current label rates do not permit this, a repeat application should be considered.”

“Don’t assume your spreader is distributing bait pellets evenly. Research by the Yorke Peninsula Alkaline Soils Group and SARDI showed that spreaders calibrated for other applications (such as urea) may not broadcast baits as widely as expected, while ute spreaders often distribute the pellets unevenly.

“Different bait products have different hardness and ballistic properties. It is recommended that bait spreaders be professionally calibrated to ensure even broadcast of the target pellet density over the entire spread width. Bait spreaders can fragment pellets during application, which can reduce the number of effective baits.”

Growers are advised to monitor live snail densities and re-apply bait as necessary. Repeat application may be needed in areas with high snail densities or where rainfall has broken down baits.

Significant rainfall can degrade the physical integrity of bran-based pellets and reduce efficacy. SARDI trials have found that exposure to ultra violet radiation does not reduce the efficacy of baits, but exposure to high temperatures degrades the active ingredient in metaldehyde baits.

Growers should avoid storing bait for long periods in places where temperatures exceed 35 degrees Celsius, such as hot sheds.

Growers need to bait mice to reduce mouse numbers, before they bait for snails. Where mice (which can consume snail baits) cannot be controlled adequately, growers should ensure that snails are receiving a sufficient dose by checking for the presence of dead snails a few days after application, and adjusting baiting rates as necessary.

The GRDC’s Bash ’em, Burn ’em, Bait ’em publication can be found at www.grdc.com.au/GRDC-Snails-BashBurnBait, while a GRDC Update paper on insights from recent research is available at https://grdc.com.au/Research-and-Development/GRDC-Update-Papers/2016/02/New-insights-into-slug-and-snail-control.