‘Big 6’ take the fight up to weeds 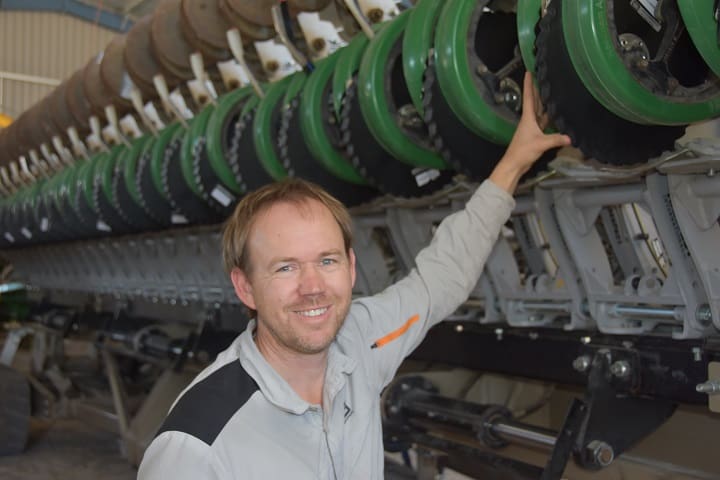 Wimmera grower Tim Rethus with the planter the family has developed to reduce weed germination at sowing. (Photo: Stock and Land)

WEED management moves to a whole new level when you add the word ‘integrated’. This is the driving force behind the WeedSmart Big 6 approach, which suggests that growers implement as many of these six key tactics as possible into their crop management programs.

Farming in Victoria’s Wimmera, the Rethus and Ruwoldt families have been working hard to build an integrated weed management system that suits their farms. In doing so they are ticking off many of the ‘Big 6’ tactics each season.

In 2018 Tim Rethus and Ian Ruwoldt attended WeedSmart Week in Narrabri and this year they are backing WeedSmart Week in their own backyard of Horsham, Victoria, on August 27-29. This practical and thought-provoking event also has the solid backing of the Birchip Cropping Group.

Mr Rethus and his brother Luke farm with their father Geoff and long-time worker Glenn in the central and southern Wimmera, where they are contending with Wimmera annual ryegrass, brome, wild oats, vetch, bifora, sow thistle and prickly lettuce.

“Dad was an early adopter of minimum tillage back in the early 1980s and we have progressively moved to farming systems that involve less and less disturbance. One of the major benefits is that we are leaving the weed seeds on the soil surface where they are exposed to the weather and don’t have the soil contact they need, and this really reduces weed seed germination.”

A key element to the Rethus’ success is their determination to achieve near-zero disturbance at planting.

When they adopting a 40-foot controlled traffic farming (CTF) system in 2008 their min-till single disc seeder did a good job and reduced soil throw but 10 years on the soil in the cropping beds has responded to the removal of machinery traffic, and the single discs were often stalling in the softer soil and the depth control was no longer adequate.

This led the Rethus family to invest in a zero-till precision planter to provide more precision at planting, including inter-row sowing for lentils, and to make best use of the newest chemistry available.

“This precision seeder was a good unit but it was complex and didn’t suit all our crops,” Mr Rethus said.

“So, we decided to combine the precision row units with twin-disc openers on a new 80-foot NDF frame but use an air-seeder to deliver the seed.”

To further reduce soil throw, residue managers are not used.

“Adding side-shifting rams to the toolbar means we can also inter-row sow our lentils and we have a seeder that meets all our requirements, especially in terms of maintaining low weed seed germination at seeding while still sowing at 15-inch row spacing.” Mr Rethus said the reality of herbicide resistance means non-chemical tools are very important to maintain low weed numbers and this is one of the driving forces behind their efforts to fully integrate hay production into their CTF system.

Farming at Kewell, Ian Ruwoldt and his brother Greg also have several strategies in place to manage ryegrass, bedstraw, marshmallow, vetch and bifora.

“Thinking about the WeedSmart Big 6 helps to formulate a plan to manage weeds through the year and through the rotation.”

For more information about the WeedSmart Big 6, visit the Weedsmart website: www.weedsmart.org.au