BLACKLEG disease has struck early canola crops on farms throughout southern Australia from South Australia, through Victoria and into southern NSW. 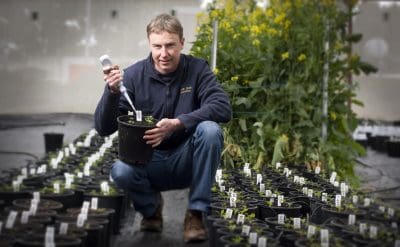 “Normally with blackleg we tell farmers to monitor their crops at end of season to see how much stem canker they have. It’s quite unusual for the disease to be striking young crops so severely at this time of the year,” Dr Marcroft said.

“There has been a lot concern from farmers and agronomists about what this will mean for yields at harvest time.”

Dr Marcroft said severe early disease infection this year could be attributed to the combination of three factors.

“Firstly, seasonal conditions have played a significant role. It has so far been a wet year, and importantly there has been constant leaf wetness from showers which is driving the disease cycle. There have not been many days where crops have been able to dry out,” he said.

“Wetness allows spores to be released and allows them to colonise the leaves and produce more spores, and keep reinfecting the crop.”

Dr Marcroft said the second factor related to the pathogen itself.

“Blackleg is sexually reproducing so it is able to overcome resistance. It’s a very diverse pathogen,” he said.

“We have seen over the last few years that farmers have been growing primarily group A resistant cultivars because they’re very good cultivars, but that has allowed the pathogen to adapt to that type of resistance and therefore the pathogen has become more virulent against those types of cultivars.”

“In 2015, the National Canola Pathology Program, with the support of the GRDC, conducted a survey of 200 paddocks and found that in about 15 per cent of those paddocks there was a resistance to fungicides,” he said.

“So just as the pathogen overcomes cultivar resistance we think it is also starting to overcome the seed treatments we use on canola crops.”

“When you put those three things together, it’s probably no wonder we have very severe disease in 2016.”

“Where we see so many lesions at this time of the year, it means the major gene resistance is not effective. The major resistance gene is not stopping blackleg from getting in,” he said.

“So how much adult plant resistance is there to stop the fungus growing from the leaf down to the crown of plant to cause canker later in the year?”

Dr Marcroft said the only way to know was to check the blackleg rating on the cultivar.

“If your cultivar has a blackleg disease rating of R (resistant) to R-MR (moderately resistant), you should be okay. But if the rating is MR and below, there is some scope for yield loss if you are now seeing disease on the leaves,” he said.

“If cultivars are rated MR and below and have a high level of disease, growers will need to make a decision as to whether they put on a foliar fungicide to protect the crop.”

If the yield potential of crops is high and therefore an economic return is likely, if the cultivar is rated MR or below, and if disease levels are high, Dr Marcroft “definitely suggests spraying”.

“All our research is showing that at the 4-6 leaf stage you get the best effect from fungicide, but if the crop has gone past that growth stage, you can probably apply a fungicide up to 8-10 leaf stage and still get some effect,” he said.

“The fungicide won’t be as effective as it would be when applied at the 4-6 leaf stage, but it will still give some protection. With high yield potential this year, growers will probably still get their money back.”