GRAINCORP has partnered with the NSW Government to deliver a $4.7 million upgrade to a major grains handling facility at Burren Junction in northern NSW. 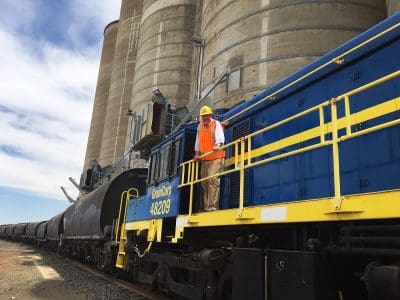 Rail loading times at Burren Junction in northern NSW will be reduced by 70 per cent as a result of a $4.7 million upgrade.

Rail loading times will be reduced by 70 per cent as a result of the upgrade, which will deliver faster cycle times to port with a freight saving of over $6 per tonne.

GrainCorp’s group general manager of storage and logistics, Neil Johns, said Burren Junction was a large site in the region and was connected to Newcastle port by rail, making it strategically important for both grain growers and grain exporters.

“By partnering with the NSW Government through its Fixing Country Rail program, the rail siding has been upgraded as well as the above rail loading equipment,” he said.

“This combination cuts the train loading time from 13 hours to under four hours, greatly reducing rail freight cost and heavy vehicle movements through local communities. In fact, for every train we use to send grain to port we are removing up to 70 trucks from local roads.”

Mr Johns said the improvements would result in higher grain prices for growers and better access to export markets.

“Rail rates from this site are about 20pc lower than they were in the 2014/15 season as a result of the investment,” he said.

“The opening of this upgraded facility is coming at a perfect time, as northern NSW is enjoying a large harvest.

“We look forward to working with the NSW Government, as part of the Fixing Country Rail program, to upgrade regional rail capability across NSW. Having this high-capacity, efficient infrastructure will help us deliver NSW grain to both local and international markets.”

The investment is part of a total $200 million to be spent under GrainCorp’s Project Regeneration initiative, which involves developing a network of high-capacity grain receival sites to support an efficient rail network.

o Roads, bunkers and other infrastructure to support loading up to a 48-unit train

o Extending rail siding from 550 metres to over 1500 metres