Can robotics revolutionise the grains industry? 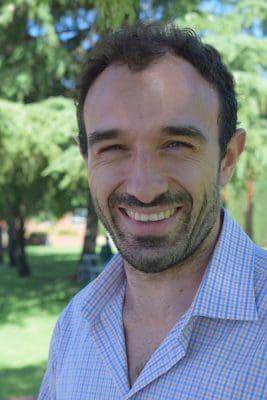 That was the message robotics engineer Mark Calleija from the Australian Centre for Field Robotics (ACFR) put to this week’s Grains Research and Development Corporation (GRDC) Grains Research Update in Wagga Wagga, NSW.

Dr Calleija shared some of the cutting-edge technologies ACFR is developing in the space of the vegetable, tree crop and livestock industries and explained how these tools could be adapted for grains.

The ACFR is one of the largest field institutes in the world and develops innovative robotics and intelligent software for agricultural and environmental applications.

Dr Calleija said the ACFR’s experience in many aspects of agriculture had the potential to be adapted to the grains industry.

“Our systems are used to reduce farm input costs such as labour and fertiliser, and aid decision making that enables farmers to increase productivity,” he said.

“While we are yet to develop a prototype that is grains industry specific, the ground work has been done and it is unlikely to take a lot of redesign to create a robot with a grains application, such as tweaking the target weeds.

“There is enormous potential in the tools are already available in the prototypes we have developed for other crop types, with functions such as automated crop mapping, weed and pest control.”

“Ladybird has numerous sensing systems, including hyperspectral, thermal infrared, panoramic vision, stereo vision with strobe, LIDAR and global positioning. These sensors allow many aspects of the crop to be measured and assessed,” Dr Calleija said. 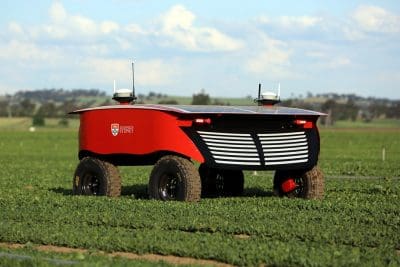 “Using RIPPA, farm input costs such as labour and fertiliser can be reduced through crop interaction mechanisms. Systems have been developed for autonomous real time weeding and spraying of weeds, crops or pests.

“It has the ability to use camera imagery and deep learning detection algorithms to identify weeds and use a steel tine to disrupt the weeds, amongst many other functions.

“Decision making tools that can be developed using the data that RIPPA collects could be used to increase the marketable yield of crops.”

In the grazing industry, the ‘SwagBot’ concept was developed as a multi-purpose robot capable of a range of farm surveillance and physical tasks.

“SwagBot is an all-terrain cattle farming robot and we have successfully demonstrated its ability to navigate farm obstacles such as hilly terrain, water, mud and branches,” Dr Calleija said.

“Soil samples collected by SwagBot could be sent away to a laboratory for analysis or analysed in-situ to build soil fertility maps for improved pastures.

“Spot spraying of weeds is a particularly labour-intensive task that is a high-priority candidate for automation, based on feedback from livestock producers.”