Can sheep turn weed seeds and chaff into cash? 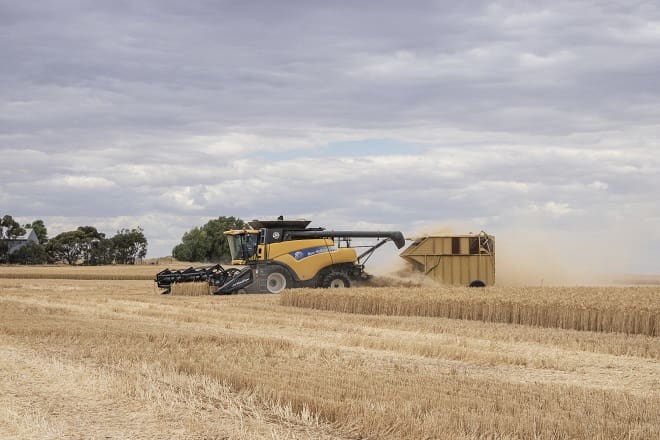 Collecting chaff and weed seeds in a chaff cart attached to the back of a header.

CHAFF carts have been doing a great job in the battle against herbicide resistant weeds and are finding a valuable niche, particularly in mixed farming enterprises in western and southern cropping regions.

AgPro Management consultant, Ed Riggall, has been validating the anecdotal evidence of the value of chaff heaps as a stock feed for the past three years and has proven that there is money to be made from using chaff heaps (and probably chaff lines) as a summer feed source for sheep.

“Using paired paddocks on farms in different regions we measured the changes in sheep weight over a period of six weeks and compared the performance of sheep grazing paddocks with chaff piles with that of sheep from the same flock grazing paddocks where the chaff had been spread,” he said.

“Data was collected in canola, wheat, oats and barley fields in eight locations in Western Australia over three years.”

Mr Riggall analysed the feed value of the chaff heaps from different crops and while the results varied considerably, canola has proven to be a consistent performer. AgPro Management consultant, Ed Riggall, has been validating the anecdotal evidence of the value of chaff heaps as a stock feed for the past three years and has proven that there is money to be made from using chaff heaps (and probably chaff lines) as a summer feed source for sheep.

This is due mainly to the higher protein level compared to cereals, which enables the chaff piles to be better digested.

The cereal chaff heaps were all similar in feed value with around four per cent crude protein and ME over 7MJ/kgDM, indicating that provision of additional protein, such as lupin grain, would be required for the sheep to make full use of cereal chaff piles.

“The results showed that sheep on chaff piles gained an average of two kilograms in the first three weeks, 500 grams more than sheep grazing stubbles (no chaff heaps),” he said. 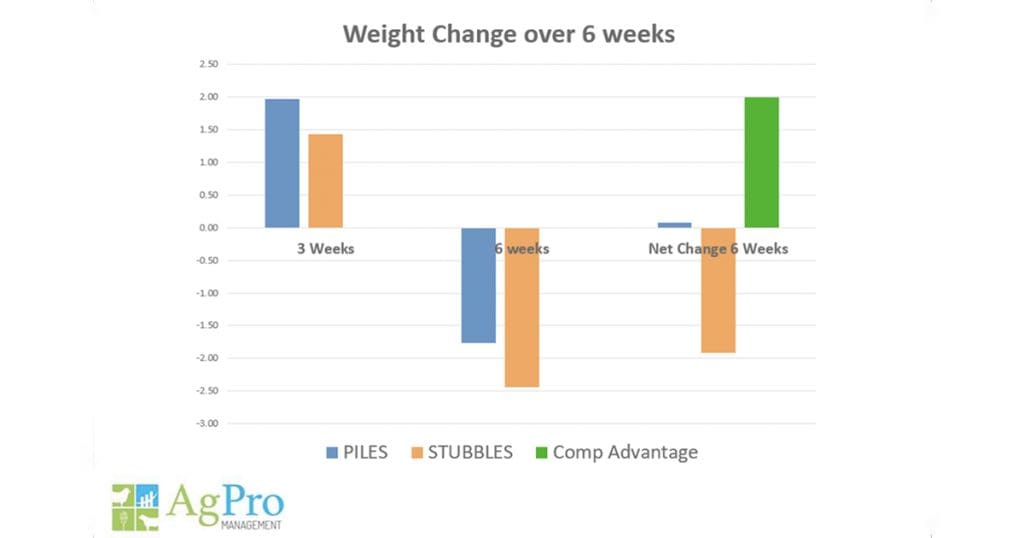 In Merino flocks this small positive net gain per head for sheep grazing chaff heaps is worth a serious amount of money, spread across the whole mob, in the form of improved condition score, increased lambing percentages and reduced summer feed costs.

When you add in the value of chaff management as a weed seed control measure to combat herbicide resistant weeds, the return quickly pays for the investment in a new chaff cart.

Meat & Livestock Australia (MLA) is currently funding a three- year demonstration site with the Gillamii group based in Cranbrook, WA, to further evaluate the value of grazing chaff heaps. Grazing sheep on chaff heaps can help to quickly repay the money invested in the purchase of a new chaff cart.

Do all sheep readily graze the chaff heaps?

Short answer: No, flocks can take some time to accept the chaff heaps as a feed source.

Longer answer: Livestock usually take time to adjust to a new feed and will tend to preferentially graze familiar feeds, even though they might be scarce or of lower feed value. It helps to include some older or more experienced individuals in the flock to show the others that it is good feed. In cereal paddocks, there is a biological limit to the amount of high ME feed animals can consume if there is insufficient protein available. Providing some supplementary grain will address this problem.

What did the economic analysis show?

Longer answer: The analysis was done on a model farm of 2000 hectares where 50pc of the area was cropped and the rest was pasture. Over summer, 9 DSE (7500 sheep) grazed chaff heaps on the 1000ha cropped area. The average weight advantage of sheep with access to chaff heaps over those that did not was 3.1kg/head (where half the area was canola and the rest cereal). Using a feed conversion rate of 3:1, the sheep with access to chaff piles consumed $250 worth of feed for ‘free’. If the farmer invested $80,000 in the chaff cart, spent $20,000 in repairs and maintenance and sold it for $20,000 in 20 years the internal rate of return on the initial investment is a huge 21pc.

Adding a chaff cart to a mixed farm is a great example of a practice that is good for both the sheep and the cropping enterprises.

Do sheep spread weed seeds from the chaff piles across the paddocks?

Longer answer: Farmers who routinely use sheep to graze chaff piles say that there is no noticeable spreading of weeds across the paddocks. DAFWA research has validated this observation to prove that weed seed is not spread and that only 3pc of weed seeds remain viable after passing through a sheep’s digestive system.

Do sheep spread nutrients from the chaff piles across the paddocks?

Short answer: Probably yes. The question is how evenly? This will depend mostly on stocking rate and other variables.

Longer answer: While there is little to no documented research about nutrient redistribution in chaff pile paddocks, there is for other grazing systems so it stands to reason that some nutrients would be spread back across the paddock. A new area of research is to consider the economic benefits of sheep grazing chaff lines, which may also have a great benefit when it comes to nutrient redistribution.

Ask your questions about the benefits of grazing chaff heaps or lines on the WeedSmart Innovations Facebook page WeedSmartAU, Twitter @WeedSmartAU or the WeedSmart website http://www.weedsmart.org.au/category/ask-a-weedsmart-expert/