Chickpea prices on the rise

Chickpea prices have been rising again since Australia’s 2016 crop got wet feet.

In July the prospect of a very big harvest in NSW and Queensland saw prices trimmed by a couple of hundred dollars from those at planting.

In what then appeared to be a perfect evolution, the monsoon arrived to plant the crops in the subcontinent, giving India some assurance of local supply, and rain in key areas of NSW continued to fall.

Shipments of Australian desi chickpea will be needed in the subcontinent at least to fill the period prior to the start of local harvests.

High prices came from a couple of consecutive years of tight crops, growers responded by planting more area so production will be up too.  There are signs prices slowly are returning now to ‘more normal’ levels.

The bid price this week for October delivery number 1 desi chickpea has been around $950/mt port.

Early shipment typically commands a premium and there is no reason that will be any different this year. 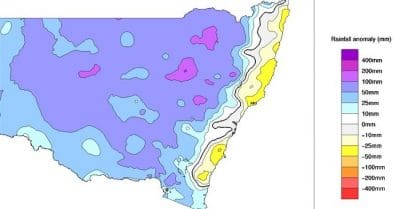 This chart compares the rainfall received since the start of September with the long-term average for the entire month of September.

With proper management many chickpea paddocks will mature to harvest successfully as long as rain is not excessive between now and harvest.

The early crop is due for harvest in October, with late areas in December.  Buyers might apply a price discount of around $50 per ton each month from the end of October to the end of December.

“The Emerald rain situation has been pretty good, an inch (25mm) in the past seven days, the crop is looking good and starting to go off well,” he said.

North of Moree has been dryer than areas around Narrabri and to the east of Walgett.

“Northern NSW chickpea harvest usually starts in the last week of October, but this year with the combination of late planting and rain some areas around Walgett are likely to be harvesting in December,” he said.

Anyone with open positions on chickpea has to manage risk of non-delivery on contracted terms.

Every situation should be managed for the individual’s circumstances; to cash-out all or part; or to make no changes and review as delivery time approaches.

Messages to growers include to keep talking to counterparties, and to make an effort to talk to other people possibly outside the usual cohort.