A CLOSED-LOOP farming system whereby pig manure is used to grow corn that is fed back to pigs is paying off for a pork producer at Deniliquin in the NSW Riverina. 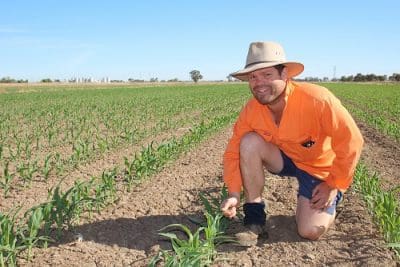 Tristan Donaldson grows corn in a closed loop at his Deniliquin piggery.

Donaldson Farming flushes the effluent from the pig sheds into a slurry pit every day, and from there it is pumped via a pipeline and mixed with irrigation water in nearby fields.

“Last summer we grew 64 hectares of PAC 606IT corn which produced 1000 tonnes of grain. Considering half the crop was patchy and the other half was amazing, overall we achieved 14.6 tonnes/hectare at 12 per cent moisture average, which is fantastic,” Mr Donaldson said.

“Some of the corn was looking you in the eye driving the header.

“With an IT corn, we also have the option to spray herbicide in-crop to tackle our biggest weed, caltrop.”

Mr Donaldson planted from late-October into early November and harvested from late-April to early May; though a small amount of crop did not come off until June 5.

All of this has been achieved while dealing with the property’s hard pan – a compacted layer of soil just below the soil surface which inhibits water and nutrient movement.

This was made more difficult last year when unlike previous years, the wet winter made it impossible to deep rip the soil before planting the corn.

“Because of our clay soils, we can get stunted growth in crops as the roots struggle to get down deep. Our agronomist Matt Barker from Rodwells is looking at ways to tackle the issue.

“Last season he did a leaf tissue test and sent it away for analysis to see what the plant was lacking.  He then made up a special brew to address this.

“Strangely enough, our first block of corn sown was the last to be harvested due to hard pan. It took so long to grow in those tough spots.”

Corn provides the pigs with high digestible energy grain in the feed, where other proteins and vitamins are also supplemented to provide a balance ration for their growth.

“Corn grown for grain provides the energy, but we also grow our own wheat, barley, peas, baled vetch and canola meal which provides the protein and fibre.”

“Paying for feed doesn’t make it worthwhile. We have bore water and Murray channel irrigation water, so it makes sense to grow our own crops. We usually budget on 10ML/ha each season.

“By using the pig manure we’re also cutting down the amount of synthetic fertilisers needed.

“I find growing a nitrogen crop like vetch in front of corn really gives it a boost too.”