CHINA’s State Reserve (SR) stocks of cotton, which reached an estimated 60 million bales in the spring of 2014, are currently estimated at just under 13 million bales, according to the latest report from the United States Department of Agriculture (USDA).

This dramatic reduction was due to three years of aggressive selling, with 11.5 million bales sold in the latest annual round of selling which ended in September.

China was able to accomplish this due to:

From 2011/12 thru 2014/15, the gap between cotton consumption and production in China was less than 5 million bales, which meant the WTO TRQ provided more access than the shortfall.

China was able to increase reserves dramatically as additional imports were allowed to offset the SR purchases from the domestic crop.

In 2015/16, China’s shift away from a price support program for cotton caused internal prices to fall, which helped to boost consumption but also helped to lower production.

The gap between the two grew to nearly 15 million bales.

With imports effectively limited to the WTO TRQ of just under 5 million bales, the SR was able to sell large quantities from reserves to fill the remaining gap.

How low the SR is willing to draw down its stocks remains one of the major unknowns for the 2018/19 marketing year.

Recent statements from government officials and trade representatives have led many to believe that the SR wishes to maintain around 11.5 million bales (2.5 million tons).

The release of an additional 3.6-million bales of sliding-scale import licenses supports the idea that net sales from the SR in the 2019 cycle will be lower than in recent years.

However, the impact on 2018/19 is expected to be limited as indicated by USDA’s current import forecast of 7 million bales, in part because of the very high level of free stocks available in China. 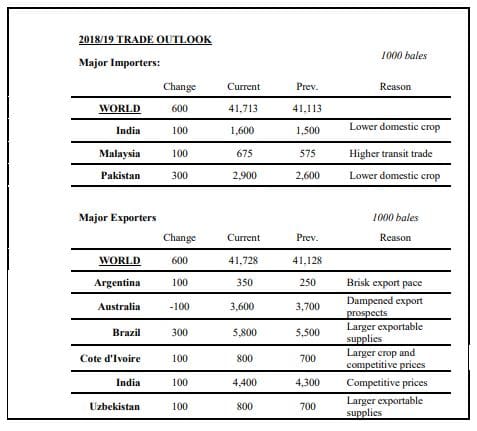 World cotton production for 2018/19 is forecast by the USDA to be down, led by Pakistan, China, and India more than offsetting higher production in Brazil.

Trade is projected up with higher Brazil exports and rising Pakistan demand.

Global use is down sharply mainly because of China’s lower-than-expected annual growth amid uncertain economic prospects and textile exports.