COOL, wet spring conditions have tempered the development of emerging cotton plants as one of the biggest irrigated and dryland plantings in years draws to a close throughout the Queensland and NSW growing regions. 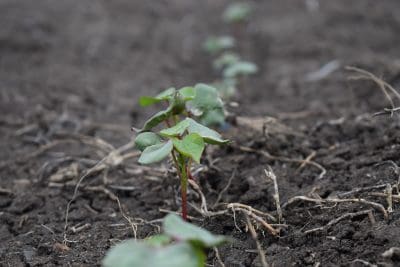 An estimated 500,000ha of cotton will be planted this season, with up to 180,00ha of that being sown as rain-fed cotton.

Planting is almost finished in most valleys, although some growers will still be putting in the last of the crop into December due to the much wider sowing window that is now available under the resistance management program for Bollgard III that was introduced this season.

“There are lots of things working against seedling cotton at the moment.”

Mr Eveleigh said there had been a few crops that had had to be replanted and there was more disease than normal.

“Black root rot has been prevalent this year, and there have been losses from Pythium and Rhizoctonia in some areas,” he said.

“All the things that impact on cotton when it is slower growing can work against it.”

Mr Eveleigh said the area planted to cotton in Australia was expected to increase to around 500,000 hectares, with a larger proportion than usual going to dryland this season.

“There are quite a few new growers or growers who haven’t been in it for quite a while.

“The price is around $500/bale which is pretty good compared to grain prices at the moment. That is why there are quite a few people who have dropped their sorghum area back and put cotton in this year.”

In one of the newer areas of dryland expansion in the upper reaches of the Liverpool Plains in the Namoi Valley, Mr Eveleigh said a sizeable dryland plant had gone in as far as Willow Tree.

“They struggled to get crop planted in the upper end of the Liverpool Plains. It was too wet and cold. It has been a real challenge temperature and moisture wise to get the crop planted. In fact, some of the area didn’t go in around Blackville because it got too late for them,” he said.