INDIA’s 2020/21 cotton stocks are forecast to surpass the previous year’s record despite a recovery in consumption from COVID-19’s significant effects in 2019/20, according to the latest report from the United States Department of Agriculture (USDA).

The USDA predicts India’s stocks will more than double in the current year amidst the highest production in six years, a four-million bale plunge in consumption and a decline in exports. 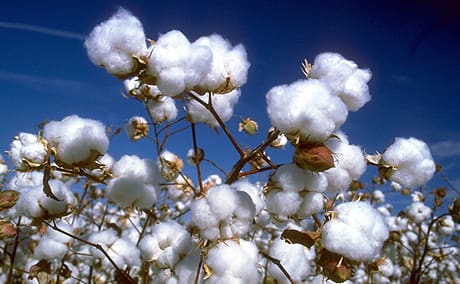 These factors have lowered domestic prices on the domestic MCX cotton contract more than 20 per cent from last June, and pressured export bids to a significant discount to all origins.

For cotton lint exports, India’s first six months of shipments were down nearly one-fifth from the previous year.

The 2019 border closure with Pakistan (a major importer) affected exports along with reported quality issues, which helped sustain Indian quotes as the world’s lowest.

Moreover, quarantine restrictions are reportedly slowing exports to neighbouring Bangladesh. Since the start of the calendar year, Indian medium-grade bids are at significant discounts to Brazil and the US medium grades.

India’s cotton yarn exports are more than 15pc below the previous year for the first seven months of 2019/20.

For domestic consumption, while COVID-19 significantly impacted all major cotton consuming countries, India is forecast to have the second-largest drop in consumption after China.

Spinning mill operating rates were reported to have plunged from the second half of March to mid-May.

Even before the pandemic took hold, domestic demand was limited as the country’s 2019/20 consumption prospects were mostly unchanged from the previous year, despite a crop that jumped nearly one-fifth.

Another significant contributor to the record stock level is the MSP (Minimum Support Price) program that’s driven the procurement of over 7 million 480-lb bales.

The Cotton Corporation of India (CCI) procures and markets Indian cotton when domestic prices undershoot the MSP, and CCI has already offered supplies at bulk discounts to help spur demand.

In addition to the record buying of the 2019/20 crop, it’s suspected that once previously-purchased stocks are included, public stockholders hold over 8 million bales.

Looking at 2020/21, a larger MSP for the 2020/21 crop is expected to sustain India’s record supplies as the global economy recovers from the COVID-19 epidemic.

Furthermore, the recovery in consumption will not be enough to offset record 2020/21 stocks, as India is the most significant contributor to record stocks outside of China.

With MSP stocks expected to account for nearly half of beginning stocks and likely future purchases by CCI of the 2020/21 crop, the extent to which CCI markets its current supplies before and during its next procurement may influence global prices. This is amidst a significant carryin from the world’s two largest exporters – a record for Brazil and the highest US levels in 12 years.

These factors are expected to pressure global prices in 2020/21. 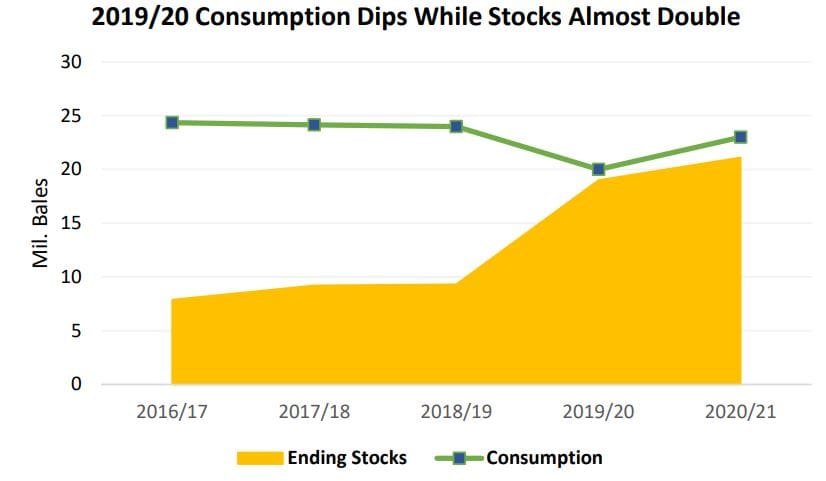