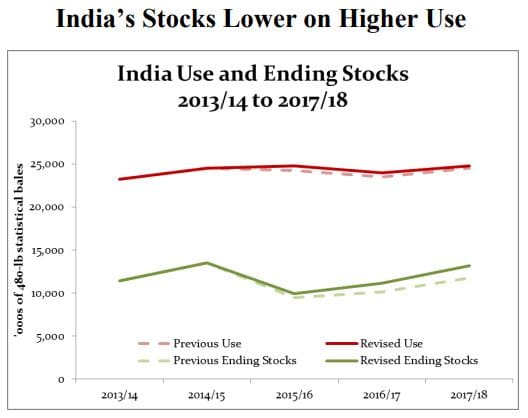 This change since the November report partly reflects a 500,000-bale cut to production, only partly offset by a 300,000-bale cut in exports, but is primarily driven by a revision to 2017/18 beginning stocks and consumption.

India’s official estimates of cotton consumption were recently revised back to the 2015/16 marketing year, showing higher use than USDA’s data.

These revisions were concentrated on “non-mill use,” indicating consumption outside the usual commercial and industrial channels.

Many market observers have suggested for some time that stocks were tighter in India than USDA reports indicated, but uncertainty persisted about which component of the balance sheet might be incorrect.

In all, from 2015/16 to 2017/18, the most recently revised data suggest an aggregate of about 1.2 million bales more consumption over the three years than indicated in the USDA’s November report.

This has a significant impact on India’s stocks-to-use, with 2017/18 stocks-to-use falling from 45 per cent in the November report to about 40pc this month.

These changes are sufficiently large to impact global balance sheets as well, with revisions to India accounting for half of lower 2017/18 ending stocks.

Most of the remainder is due to Pakistan, owing to its greatly reduced crop, or higher exports from Australia, Brazil, and the United States.

The US balance sheet has production up slightly and exports up by a greater amount, resulting in lower ending stocks. The US season-average farm price is raised three cents to 66 cents per pound.

Spot prices and the A-index have moved upwards as global demand conditions continue to appear strong, and crop outlooks for some major producers, such as Pakistan, weaken.