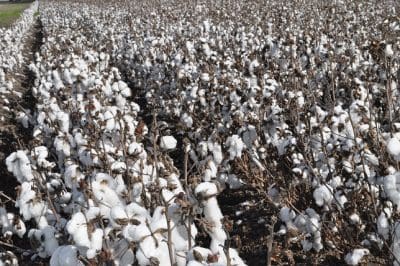 The export forecast has lifted 800,000 bales to 14.0 million, based on strong export sales during March.

This would be the fourth-largest volume ever for US exports, accounting for nearly 40 per cent of world trade.

US ending stocks are now forecast at 3.7 million bales, equivalent to 21pc of total disappearance.

The report says the marketing year price received by US producers is projected to average between 67 and 69 cents per pound, a reduction of 1 cent at the upper end of the range.

Higher production estimates for China and Brazil are only partly offset by a slightly smaller crop in Australia.

The USDA has revised down its estimate for the Australian cotton crop by 0.1 million bales from the previous month to 4.4 million,  which is up 1.55 million or 54pc from last year.

Yield is estimated to be 1.652 tonnes/hectare, 22pc below the five-year average and a decrease from last year because the area sown to dryland cotton has increased.

Also, higher cotton prices relative to sorghum have shifted sorghum area to cotton in Queensland and northern NSW where these crops compete.