VICTORIAN mixed-farmer Bruce Macague has seen a lift in his grain and lamb output after adjusting the cropping program on the family property near Rochester in the state’s north. 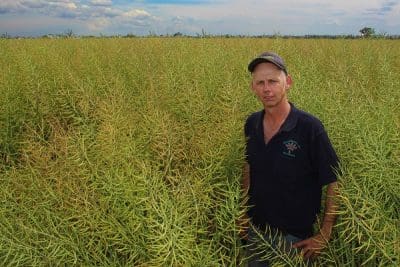 Mr Macaque runs ‘Ballinode’ with his wife Lindsey and son Hugh, planting about 1600 hectares of canola, wheat, barley, chickpeas and oaten hay for export a year, along with running up to 4000 crossbred lambs for the export meat market.

They had been sowing fodder rape and a popular graze and grain wheat for several years, but began to revaluate the program when drawbacks became apparent.

“We were grazing fodder rape for a while but we didn’t like the fact that it was single purpose – that you couldn’t take it for grain,” Mr Macague said.

“And our Wedgetail wheat has been very good here but it couldn’t go H2, it was always stuck at APW.  Plus, it was easily weather damaged and had cultivated oats in it, so it was time to upgrade.”

Their solution was to introduce Clearfield graze and grain winter canola hybrid Hyola 970CL into the program in 2015 and new dual-purpose Kittyhawk wheat this year.

“We still needed something else in the rotation other than wheat to keep the weed pressure down, so Clearfield chemistry in the canola fits the bill here with weeds like ryegrass and wild radish.

“Also, Kittyhawk can be taken for high protein wheat, so that was attractive to us.

“Both have showed high feed value and yields in trials.”

The program was going well when disaster struck for the Macagues and many other farmers in the southern region.

“The 2015 season was the worst season we have ever seen.  We received half the typical growing season rainfall (usually 300mm), so our best yields were 300 kilograms/hectare.”

Fast forward to the 2016 season and the weather was conducive to bumper crops for many.

“It was an extreme turnaround.  We went from the worst season to the best season.”

Their 30ha crop of Hyola 970CL yielded 3t/ha average at harvest in January.

“It took a long time before it could be windrowed due to the moisture, but eventually the contractor could get in the crop at the start of December.

“I put the header through in January and because it was so thick, it was difficult to harvest.”

Mr Macague sowed the canola dry in March 2016 using an Excel single disc seeder at a rate of 3kg/ha on 200mm rows.

He irrigated it up on flood irrigation, and as it received good rain through April and for the rest of the season, further irrigation was not needed.

“The crop was not grazed because the season was so favourable I had an excess of feed, so only the Wedgetail was grazed because it higher risk of lodging.”

Another paddock of 970CL was planted alongside the other mature crop in November 2016, which was grazed for the first time in April.

“The second lot of 970CL was grazed at first node stage, then again, before being locked up in July.  We’ll probably harvest it in December.

“The lambs took a few days to get the taste of the canola as usual, but really get stuck into it after a few days.  I always have some cereal hay in the paddock with them to provide them with some roughage.”

Their first ever crop of Kittyhawk wheat was planted to 30ha in March.

“We irrigated it up and it looks terrific and has provides terrific quality grazing.  It has now been locked up till harvest when I expect it should yield 5-6t/ha.”