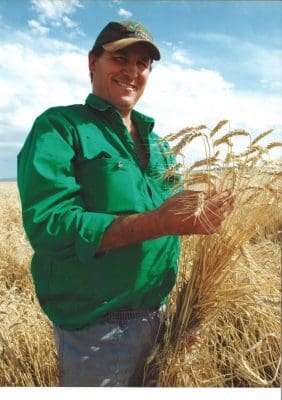 NSW Department of Primary Industries (DPI) Durum Breeder, Dr. Gururaj Kadkol said there was some concern regarding the quality of the 2016 crop due to the wet conditions, however the variety produced high protein and good overall quality in the majority of the crops.

“On average the Lillaroi crop produced up 0.4% higher protein relative to Caparoi in DBA trials and it put more of the crops into DR1 grade,” Dr Kadkol said.

“The latest results, combined with the 2015 crop performance, demonstrate the adaptation of DBA Lillaroi to both wet and dry conditions.”

“In 2015 I grew trial crops of a few different durum varieties, which out of these lines only DBA Lillaroi produced DR1 quality and good yield. In 2016 I planted a bigger crop of Lillaroi that produced high yield and DR1 quality,” Mr Murchison said.

“At planting I pre-drilled 250 kg urea and top dressed the crop the crop with 150 kg urea to improve grain protein. The sowing rate was 70 kg/ha on 15” row spacing and I applied 50 kg starter fertilizer with the seed. Lillaroi handled the extra nitrogen very well producing acceptable screenings and 15% grain protein. The crop harvested easily.

“I found Lillaroi has a good tolerance to black point and the quality to produce DR1 grain. Some of my neighbors have decided to start growing Lillaroi this season,” Mr. Murchison said.

“It produced the best looking grain I have ever grown, with nearly 100% vitreous kernels, less than 1% screenings and great colour. The wet weather prevented me from top dressing the crop, but it still averaged 6t/ha and the protein content was just below 13%. This performance reaffirmed my confidence in the variety.”

“Lillaroi is also suited to dry and hot finishes. In 2015 we had the early October heat blast, but Lillaroi was spot on for high protein and low screenings. This variety really suits my farming practices,” Mr Durham said.

Mr Gooderham said his Lillaroi crop had excellent vigour, stood up very well, it was very even and it was a dream to harvest.

“I grew the crop on a long fallow. Its nitrogen status was very good so I only applied 40 kg starter fertiliser. As the season was wet, I conducted another soil test at flowering, which confirmed there was enough nitrogen and didn’t need to top dress the crop.

“It has also been grown successfully under irrigation on the Liverpool Plains.

“It has an excellent combination of quality, stress tolerance, disease resistance and yield potential. Therefore it will serve the durum industry well and be a part of the northern durum variety mix for a long time.”

Growers can get their DBA Lillaroi seed through Seednet.

DBA Lillaroi was developed by NSW DPI as part of Durum Breeding Australia (DBA), a joint project with the Grains Research & Development Corporation and The University of Adelaide.