Debbie delivers handy rains for inland croppers, minus the destruction

CYCLONE Debbie, which brought destructive winds and flooding to the coastal regions of southern Queensland and north east NSW last week, produced more benign, beneficial rainfall for much of the inland grain belt from Central Queensland to north west NSW.

Rainfall for the week ending 3 April 2017. Click on map to view in larger format.

While the deep rain depression that formed once the cyclone crossed over land was the last thing cotton growers in the midst of picking this season’s crop needed, falls of 50 to 150 millimetres across the farming regions were otherwise welcomed by producers looking ahead to winter crop planting.

The inland farming areas in Central Queensland largely dodged the destructive winds and torrential rains that hit coastal regions, wreaking havoc on sugar cane and horticulture crops in the vicinity of Bowen and Airlie Beach where the cyclone made landfall.

Likewise, the subsequent rain depression that tracked southwards through south-east Queensland and the NSW North Coast before heading out to sea brought devastating flooding to coastal regions in its path but spared the inland farming regions.

“It was fantastic rain that fell on all the dryland country. It was a good couple of days of steady, solid rain,” he said.

Mr Young said the rain was a boost for winter crop producers gearing up for sowing to start in the next few weeks.

“There will be another massive chickpea season. I think it will be bigger than last year. It could be 200,000 hectares plus in CQ,” he said.

“Chickpeas will be about 80pc of the crop, and wheat will be the other 20pc.”

However, Mr Young said the rain would have an adverse effect on fibre quality on cotton crops ready for, or nearing, picking.

There will be another massive chickpea season. I think it will be bigger than last year.

“All the crops that were 30 to 40 per cent open have some boll rot already and haven’t come through it all that well. There is still a long way to go with the later crops which won’t be defoliated until around the middle of May,” he said.

Further south on the Darling Downs, Elders agronomist at Dalby, Jordan McDonald, said falls of around 100 mm would set growers up for a big winter crop planting in coming weeks.

“There will be more chickpeas go in now, particularly as growers will be able to double crop chickpeas coming out of summer crop now there is a moisture profile,” he said.

“I think there will be a similar area as last year with chickpeas which is surprising because I didn’t think they would be able to do it again. But with them not being able to plant many summer crops, there is a fair bit of fallow country open for chickpeas again. 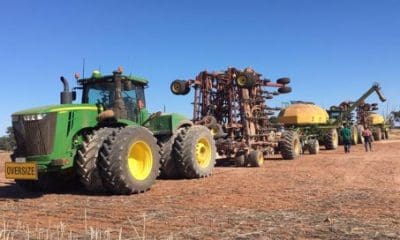 Spin-off rains from Cyclone Debbie have seen growers gearing up for a big winter crop planting this season.

“Sowing will kick off on the western Downs in early-May while the rest of the Darling Downs will wait until mid-May. With the rain they have had they should be able to plant on that because you can go deep with chickpeas. It has been a planting rain for quite a few clients if they follow the moisture deep.”

Mr McDonald said the rain was a mixed blessing for mungbean crops still to be harvested in the region.

“There were a lot that were already sprayed out and ready for harvest, so the rain will be a negative for that, but any that were planted in late January will have some handy yields out of the rain. It will be a couple of weeks yet before they are sprayed out and harvested. There will be some nice crops, but there aren’t a lot out there,” he said.

He said the rain was a negative for cotton crops, disrupting picking and likely to cause further quality discounts.

“There are clients with cotton defoliated and having issues with the cotton starting to grow again. They will have to come back with another hit of defoliant to try to get the leaf off,” he said.