Defend or grow? These plants do both 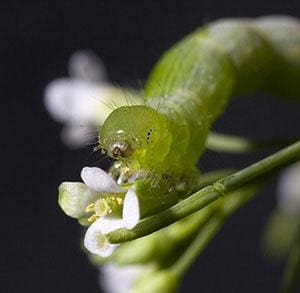 A cabbage looper caterpillar crawls on an Arabidopsis plant.

FROM natural ecosystems to farmers’ paddocks, plants face a dilemma of energy use: outgrow and outcompete their neighbours for light, or defend themselves against insects and disease.

But what if you could grow a plant that does both at the same time?

A team of researchers at Michigan State University (MSU) in the United States is the first to accomplish that feat, and the breakthrough could have fruitful implications for farmers trying to increase crop yields and feed the planet’s growing population.

“We’ve created a genetic combination that no one has ever made before,” said plant scientist Gregg Howe, MSU Foundation professor of biochemistry and molecular biology, who led the study.

“We got an unexpected outcome, and these results turned out to be quite interesting. This research may open up new ways of thinking about how valuable plant traits can be combined in novel and useful ways.”

In a paper published in the current issue of Nature Communications, Howe, a member of the Plant Research Lab at MSU, and his team describe how they were able to modify an Arabidopsis plant — a relative of mustard — by “knocking out” both a defence hormone repressor and a light receptor in the plant. This genetic alteration allowed the plant to grow fast and defend itself from insects at the same time.

“Normally plants can’t do both. It is generally thought that plants have a fixed energy budget, and they put that energy toward one process at the expense of other processes. There is a tradeoff,” Mr Howe said. “But in our plant there’s not an energy tradeoff. We’ve upset that paradigm.”

Plants in nature and agriculture that are stressed by drought, diseases or insects will mount defensive responses, and at the same time will typically stop growing or grow more slowly. Likewise, when plants are subject to conditions where they must grow fast, such as competing for light when neighbours encroach — called the shade avoidance response — their defences become compromised.

“This is the growth-defence concept: you promote defence but at the same time you give up growth,” Mr Howe said. “More growth equals less defence, more defence equals less growth. But we’ve done some genetic trickery to get a plant to do both.”

The implications of this breakthrough could have major practical applications in agriculture as the research continues to develop. If the results of the study can be replicated in crop plants, the work could have direct benefits for farmers trying to feed a world population that is expected to reach nine billion by the year 2050. According to the Bill and Melinda Gates foundation, food production will need to increase by 70 per cent to 100pc to feed that growing population.

“But can we do this in a crop plant — that is something we want to pursue,” Mr Howe said of the next steps in their research.

One common way for farmers to increase crop yields is to increase the density of their plantings. This leaves row crops — such as corn or soybeans — competing against one another for light, and in doing so lowering their defences and leaving them susceptible to infestation and disease. To counter these risks of growing densely planted crops, farmers must apply pesticides.

“If we can design better corn plants, you could pack them in and they would be well defended all the time without pesticides — that’s one potential direction this research could go,” Howe said. “The growth-defence tradeoffs we’ve observed aren’t something found only in Arabidopsis, it’s found in all plants. The hormone and light response pathways we’ve modified are in all the major crops.”

The research, funded in part by the US Department of Energy, has revealed a connection in plants between the roles played by defence signalling and light signalling, processes that activate genes in response to environmental stresses. Eye-opening results such as these came as a surprise even to the research team.

“Initially I was sceptical of the research idea and thought ‘that’s crazy.’ But we took the risk and it proved to pay off,” Mr Howe said. “We’ve grown a plant that can have its cake and eat it too. The fact that it can be done is remarkable.”

RELATED ARTICLE: Research to speed up battle against wheat rust