It may be approaching winter in Kansas, but the field work on wheat genetics is going full steam for wheat scientist Jesse Poland. 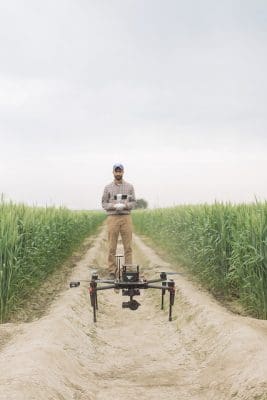 Half a world away, Poland – an associate professor of plant pathology at Kansas State University – is learning critical information that will lead to future generations of wheat in Kansas and beyond.

“Field seasons in India, Pakistan and Bangladesh are offset from the field seasons here in Kansas,” assistant professor Poland, who is also director of the university’s Feed the Future Innovation Lab for Applied Wheat Genomics, said.

“We can actually be doing work in India during the winter here, learning things and improving the systems, then bring that back and add another season of innovation and improvement here in Kansas. It greatly increases the speed of innovation and testing in our field research.”

For the past three years, assistant professor Poland and a team of researchers have worked in five countries to test and develop new agricultural technologies that are already improving the way crops are grown.

The most promising of those technologies is the use of unmanned aerial vehicles (UAVs), or drones, to scout agricultural fields for important data. UAVs can do the work in a fraction of the time that it would take humans.

“What we are trying to do is take these UAVs to the breeding fields to efficiently and quickly measure plant traits,” Kansas State University graduate student from India, Daljit Singh, said.

Armed with sophisticated, multi-spectral cameras measuring only a few inches, the drones work up and down rows of lush wheat fields, measuring traits such as the plant’s height and vegetation index, or ‘green-ness’ of the plant, which is determined by the amount of light it reflects.

The process is known as high-throughput phenotyping because it collects large amounts of information about the plant’s traits, or phenotype.

“From that, we create a vegetation index because the light reflected from the plant leaves can be associated with the stress levels. The amount of near-infrared reflectance is an indication of whether the plant is going through some type of stress. It can be sick, or have other diseases. It gives us a rapid measurement of what is going on.”

For more complex phenotypes, assistant professor Poland said: “It’s similar to facial recognition algorithms; it is using artificial intelligence directly on images. We are developing partnerships with many groups to apply these same approaches to pictures of wheat plants. So, using big datasets of hundreds of thousands of images, you train these algorithms to look at different pictures of wheat plants and identify traits of interest.”

The use of drones and the quickness with which they collect information helps researchers develop massive data sets. Assistant professor Poland said scientists now had the ability to compare genetic differences between thousands of candidate wheat varieties to make better yielding, more heat tolerant and more disease resistant varieties.

“If you can do more rapid and more accurate selections, then you’re really more efficient in finding that needle in the haystack, the one out of 1000 that is better all around that can be a new high-performing wheat variety,” assistant professor Poland said.

K-State’s Feed the Future Innovation Lab for Applied Wheat Genomics was funded in 2013 for $5 million and has projects in the US, India, Pakistan, Bangladesh and Mexico, where Poland says his group works directly with scientists at the International Maize and Wheat Improvement Center (CIMMYT).

Assistant professor Poland said that CIMMYT is “by far the most advanced, elite breeding program in the world,” distributing new wheat varieties across the globe.

Broadly speaking, the work by Poland’s team will help contribute toward food security for a world population that is expected to reach 9.7 billion people by the year 2050.

It’s one big reason why the US Agency for International Development has funded 24 Feed the Future labs that address numerous challenges in agriculture, including the one that Poland directs and three others at Kansas State University.

“As a very blessed country with a lot of resources, there comes an equal responsibility to take that to the benefit of the rest of the world,” assistant professor Poland said.

“We are trying to help a number of countries, but especially ones defined in the Feed the Future initiatives that are really in a state of current or potential food insecurity. That represents hundreds and hundreds of millions of people in these target regions that are at or maybe just a step above subsistence level farming and household nutrition.

“An obvious benefit of doing this work is to take agricultural innovations that can help these countries and these people to develop into more productive economies and increase their food security and standard of living.”