THE SOUTH Australian winter crop now being harvested is forecast to yield 6.2 million tonnes (Mt), 23 per cent below the 10-year average of 8Mt, and 22pc below the initial forecast released in August of 7.95Mt. 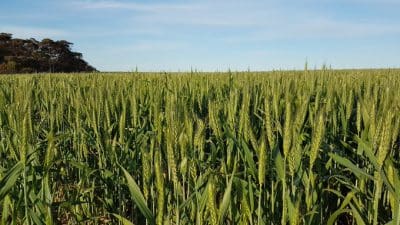 Crops on the Yorke Peninsula are seen as having average to slightly above average yield prospects. Photo: James Preuss, Concierge Genetics

The figure comes from the Primary Industries and Regions SA (PIRSA) latest edition of its periodic Crop and Pasture Report, which pegs area sown to winter crops at 3.84 million hectares (Mha).

Released last Thursday, the report says ongoing dry conditions and below-average rainfall during July and August have reduced yield prospects in many areas.

On top of that, frosts in August impacted yield prospects on some flowering and heading crops which have been or will be cut for hay.

Minister for Primary Industries and Regional Development Tim Whetstone said despite the crop forecast being similar to last season, the expected farm-gate value has increased to $1.8 billion, up slightly from the previous two crop years.

“Since the release of the last Crop and Pasture Report and a positive start to the season, many farmers were hoping for significant rain which sadly hasn’t arrived,” Mr Whetstone said.

PIRSA said crop establishment and condition in most districts was good to excellent early in the season, but has since declined as dry conditions in late winter persisted.

“The report identifies the crop potential in several districts, including Yorke Peninsula and western Eyre Peninsula, has improved from the poor performance of last season.”

Mr Whetstone said concerns in many pastoral zones continued because of below-average rainfall and record low rainfall in some areas.

“The report further notes that most surface water supplies remain dry, and stocking rates are low, or properties are completely destocked.”

PIRSA said late autumn and early winter rainfall was average to above average, and provided a timely opening to the season, but the record dry January to April resulted in dry subsoils in most districts.

Generally good opening rains resulted in a normal crop establishment, with a return to a near-average crop area across the state.

Overall, rainfall for the growing season to date has been average to below average across much of the cereal zone.

South Australia’s best crop prospects are seen to exist on the Lower Eyre Peninsula, and in the southern Murray-Mallee, South East and Kangaroo Island districts, where production is expected to be near or slightly above average.

Crops and pasture on the eastern Eyre Peninsula, and parts of the northern Murray-Mallee, are in poor condition.

In other regions, earlier good crop potential has declined with the lack of rain, although at this stage crops are faring better than they were last year in a number of districts.

New-season hay now being cut is hitting the market, and easing the shortage of fodder which was noticeable up until last month.

Cereals up in mix

Area sown to wheat, barley and other cereals has increased in South Australia this year at the expense of canola and most pulses, which do not perform as well on dry subsoils.

Dry conditions across the state in July and August, combined with frost, slowed crop growth and hastened crops into flowering stage.

Canola crops in many districts commenced flowering in August, when earlier cereal crops came into head. 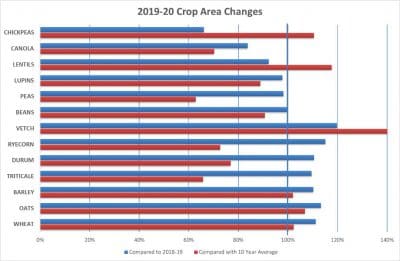 Paddock-feed levels are low in the driest areas, but some districts have good pasture bulk.

Farmers have sown an increased area of pasture feed and hay.

Cases of foliar disease in pulses and cereals in some areas and root rots due to plants suffering moisture stress have been widely reported.

Strong winds continue to cause soil erosion in paddocks in districts with dry surface soil and no ground cover.