A NEW short season oat variety with the potential to open up areas of oat grain production in the medium to low rainfall regions of Western Australia has just been released.

Durack oats continues the tradition of naming oat varieties after rivers and also pays tribute to one of WA’s pioneering agricultural families. 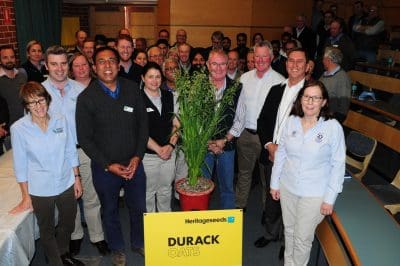 Industry leaders at the launch of the new oat variety, Durack.

Speaking at the launch of the new variety at the Grains Industry Association of Western Australia’s recent Oat Spring Forum at the Muresk Institute, DAFWA acting director general Mark Webb said Durack had the potential to be a dual purpose food grain or hay variety.

It would satisfy increasing interest in oat production, particularly from medium to low rainfall areas.

“Oat production has increased significantly in WA in recent years, with an estimated 341,000 hectares planted this season,” Mr Webb said.

“This growth has been driven by a gradual increase in demand for high quality food oats, particularly from Asia, and local investments to increase milling capacity, which has the potential to double local processing demand in the next five years.

“Durack will provide growers with a reliable, early maturing variety that has been bred to suit medium to low rainfall conditions, while at the same time providing growers in higher rainfall areas with a useful option for delayed sowing or pre-seeding weed management.”

While Durack has been bred to satisfy milling requirements, it will undergo final commercial milling evaluation after harvest to confirm its status before sowing in 2017.

Durack is a tall variety with competitive yield potential and outstanding grain quality.

While yields associated with tall oat varieties may not surpass dwarf oats, the grain quality characteristics of Durack indicate it will provide robust performance when compared with other varieties in medium-lower rainfall areas.

In particular, Durack has higher hectolitre weights and lower screenings than current milling varieties, such as Carrolup and Williams.

Seed of Durack is being made available for the 2017 growing season through Heritage Seeds and is subject to PBR.

It will be supported by a Durack agronomy package, developed by DAFWA, to assist growers to optimise their crop’s potential.

The program has proved to be a highly successful R&D model, led by the South Australian Research and Development Institute’s Dr Pamela Zwer and her team.

More information about Durack is available on the DAFWA’s website agric.wa.gov.au