IT has been a positive start to autumn for many NSW crop producers with above average rainfall received across some areas of the state’s cropping regions. 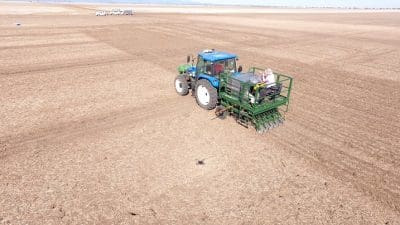 However, coastal areas had to deal with the deluge from ex-tropical cyclone Debbie, which damaged pastures and crops on the north coast.

“Rainfall across the state ranged from 0-1170 millimetres during March,” he said.

Mr McGowen said strong winds, heavy rainfall and flooding along the mid-north to north coast caused severe damage to pastures and crops including sugar cane and bananas, and increased the risk of root disease in soybeans.

“In other parts of the state, the March rainfall provided an early autumn break for farmers and graziers, although falls were lighter in the south and areas of the north west. The break has allowed preparation for and sowing of dual purpose cereals and canola to get underway,” he said.

“The earlier sown crops have responded well, although follow up rainfall will be necessary soon, particularly in areas of southern and north western NSW.

“Paddock preparation is also underway particularly weed control, for main season winter crop sowings. Hybrid canola seed is in short supply, with the demand for seed high. In the south, rice harvesting is commencing. Yields from late sown summer crops in northern NSW have been affected by the hot and dry conditions over summer.”

The Bureau of Meteorology’s rainfall outlook for April to June indicates drier than normal conditions are likely across most of NSW, with daytime temperatures likely to be warmer than normal across the western half of NSW, areas of the far south east and far north east.

Many global climate models are also indicating the likelihood of drier than normal conditions during April to June, with the possibility of an El Niño event occurring in late winter or spring.

Model accuracy is low at this time of year, so this may not eventuate. However, some preparation for a potentially drier season is worthwhile.