DELIVERIES to South Australia’s bulk handler, Viterra, hit 3.5 million tonnes (Mt) on Monday after a week of cool and wet conditions which slowed harvest activity and saw only 534,000t of grain received. 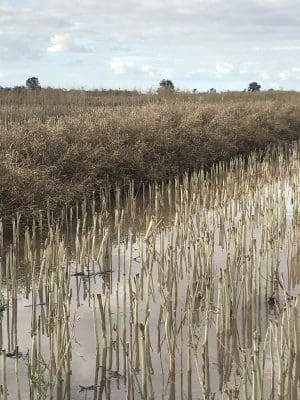 Recent rain stopped harvest of this crop of canola near Wyalong in NSW. Photo: Paul McCaskie

Progress was also limited by rain in Queensland, NSW and Victoria, where bulk handler GrainCorp reports eastern states received a total of 375,500t to take the harvest total to yesterday to 3.86Mt.

The NSW intake lifted to 1.69Mt after a paltry 74,500t was delivered to the system in the wake of downpours in the state’s southern half, where rain stopped harvest at its peak.

GrainCorp’s Victorian sites took in a surprisingly high 296,500t to reflect the fact that many growers in the Wimmera and Mallee were able to resume harvest after a break of a few days instead of the whole week, as was the case in much of NSW.

GrainCorp said harvest had now resumed in southern NSW and Victoria, but heatwave conditions forecast for this week might cause further issues with grain quality.

GrainCorp and Viterra have opened a number of segregations across their network to accept weather-damaged grain at selected sites, and have also deployed falling numbers machines to more accurately determine grain quality.

Viterra said 144,053t of grain was delivered into its Western region sites in the past week, to push the region’s total to 1.06Mt, and new wheat segregations of FED1 and SFW1 have opened at a number of sites to increase growers’ chances of getting better prices for weather-damaged grain.

Many growers in the region have finished harvest, with the remaining crop largely to come from the lower Eyre Peninsula.

Receivals in the Central region have hit 1.75Mt after 243,944t was received over the week, as the canola and pulse harvest finish, and growers switch attention to wheat and barley.

Remaining volume is expected to come from the Yorke Peninsula and the Lower North.

Growers in the Loxton district are winding up, while those in the Wolseley, Frances and Millicent are only just getting started.

Beans are still coming in fast, but delivery of lentils, peas and lupins has slowed down.

A canola grade called CAGN has been introduced at Bordertown to give growers access to a higher green seed count.

Three vessels were loaded at Adelaide’s ports last week with barley and wheat. Container packing is increasing for lentils and peas.