EASTERN Australia’s 2018 winter-crop harvest is off to a fitful start in Central Queensland (CQ), as contractors build drought-affected schedules which will service their clients and allow them to earn some dollars driving trucks or other people’s machines. 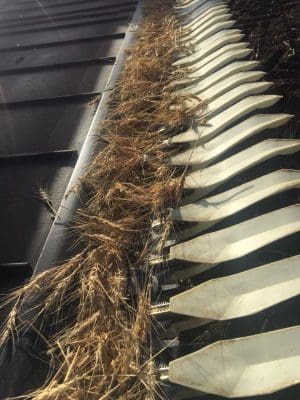 Light crop fingers are used on this 2018 CQ wheat crop to gather the maximum number of heads. Photo: Horton Harvesting

For many contractors, that looks like including some weeks working on the bumper harvest anticipated in Western Australia once they have covered their commitments in what is shaping up to be a short, fast and largely disappointing harvest in Queensland, NSW and northern Victoria.

In the northern reaches of Central Queensland, the wheat harvest is well under way for some growers, and the bulk of the region’s better yields are expected in its Southern Highlands, where harvest for most is yet to start.

GrainCorp said it would be opening a reduced number of sites this year due to the smaller production outlook, and has advised growers to contact their local GrainCorp Grower Services team to discuss delivery options.

The best of Queensland’s winter crops are largely south of Emerald in CQ, and on the western Darling Downs and Maranoa in districts including Condamine, Dulacca, Meandarra, Muckadilla and Roma, and north of Goondiwindi to Moonie.

In NSW, most crops from around Forbes south have reasonable prospects which improve going east and south, while southern South Australia, and southwest Victoria have the best yield prospects in eastern Australia.

Horton Harvesting principal, Evan Horton, said his Oakey-based business spent five weeks harvesting in CQ last year at the start of the 2017 run, but was finished this year in four days.

“I’d say we’d be down 60 per cent on the area we normally do, but we’re lucky to have some clients with crops to harvest.”

“Some other contractors haven’t got a grain to harvest.”

“We do 50pc of our work in Mungindi, but we won’t be doing much there this year.

“Then we go to Forbes, and we’re hoping they get some rain to help that crop along before we go to Ardlethan and Henty, which are looking okay.”

CQ wheat yields are reported as being average at best at 1-2.5 tonnes per hectare, and chickpea yields are expected to have been hit by frost, with some crops being cut for hay and others deemed unworthy of harvest.

Robinson Grain trader, Luke Murphy, said none of the chickpea crops he inspected on a recent visit to CQ had escaped frost damage.

“Pods might be 20pc frosted, or up to 60 or 70pc frosted, but all the crops we looked at had some damage,” Mr Murphy said.

GrainCorp will not be opening its Biloela, Dingo and Koorngoo sites this year, but said warehousing options were available, and storage capacity for chickpeas has been made available at its Gladstone terminal.

John Darby operates three headers from his base at Cambooya on the Darling Downs, and is normally kept busy for several weeks harvesting in southern Queensland and northern NSW.

“I’ll be doing 200 hectares at Moonie, and that’ll be it for me in Queensland and NSW this year,” Mr Darby said.

“I started harvesting on the Liverpool Plains in 1973, and this will be the first year I’ve had nothing there.”

Mr Darby’s Collarenebri client will also be harvesting nothing this year, and he and a driver he employs have busied themselves carting hay and grain through the transport arm of his business.

“I’d put my hand up to go to WA and drive a header if they need us.”

“There is crop to be harvested, and some growers will be happy just to get enough seed to plant next year’s crop.”

Mr Mulholland said frosts from CQ to southern areas were compounding difficulties for contractors in estimating the time needed to harvest crops.

“It’s very hard for our members to plan their work commitments, and our main concern is how they are going to make the payments on the loans.

“From about now until the end of the year, they are usually flat out, and some of them won’t get their machines out of the shed.”

He said some experienced header drivers, including contractors, were expected to work on the WA harvest once their eastern commitments were met.

“It sounds like they’ve got a big crop coming over there, and they’ve already shown some interest in getting drivers from the east to help them get it off.”

Mr Mulholland is based south of Echuca, and services growers in Victoria and southern NSW.

He said growers were determining whether those crops with low yield potential would be worth more as hay, which would also influence the length of harvest.

“Grain harvest down here normally starts with cutting canola from mid to late October, and finishes up around Christmas.”

“This year, the wheat could be early and we might be packed up by the middle of December.”

“All we’ve got to harvest this year is 50ha that was under a centre pivot, when normally we’d do 4000ha around here.

“We usually go to Coonamble, but they didn’t harvest last year, and they won’t be harvesting this year either.”

WA contract harvester James Buttle said crops were “looking magic” north and east of Esperance, and would yield well with a soft finish to the season.

“We haven’t been hit by the frost, and our year has been drier than normal, but that’s meant we haven’t had the waterlogging we usually do.”

Mr Buttle operates four headers, and said they were expected to start early November, about two weeks later than normal, because of the late arrival of germination rains.

While a patch in the centre of WA’s southern growing area is believed to have been hard hit by frost, most central and northern districts are on track for above-average yields.

Mr Mulholland said those looking for contractors or header drivers this harvest were advised to post on the Australian Custom Harvesters, Inc page on Facebook.