THE decision by eastern states bulk handler, GrainCorp, to sell some of its up-country assets has presented growers, traders and grower/traders with an opportunity to invest in storage and grain-handling facilities in Queensland, NSW and Victoria. 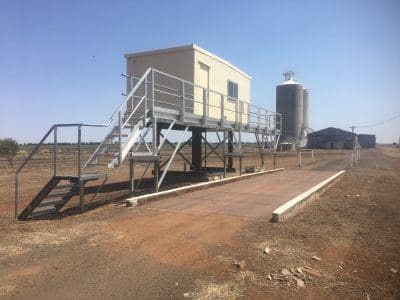 Gavin Burey has bought the Muckadilla receival site from GrainCorp and carried out upgrades in time for the 2017 harvest.

Among those to sell have been Muckadilla in south-west Queensland, Mogriguy in central NSW, and Netherby in Victoria’s Wimmera region.

Grower Gavin Burey has purchased GrainCorp’s Muckadilla site, which was offered for sale largely because it fell beyond the western boundary of the company’s receival network.

Mr Burey said the 10,000-tonne site came to his attention as an alternative to building on-farm storage on his farm at Amby, west of Muckadilla.

“The whole silo complex is in good order, we’ve just upgraded our weighbridge and got our office and testing facilities certified, and we’ve got ourselves a site with all-weather access.”

“It came at a more reasonable price than building on-farm storage would have, and with 90 per cent of our grain going east, it was in the right location.”

Mr Burey said he had used silo bags to store wheat from the 2015 and 2016 harvests, and did not start loading out until July.

“They worked well, but permanent storage gives us more options.”

His purchase of the Muckadilla site has also enabled him to move into grain trading and warehousing.

While GrainCorp has been widely acknowledged by growers as providing an important service in grain-growing locations, Mr Burey said operators like himself could operate sites with more flexibility than a corporate like GrainCorp could.

“If someone rings on a Sunday night and asks to load out grain from the storage, we can accommodate that.”

The only other publicised sale of a GrainCorp asset in Queensland has been the Ryan family’s purchase of the site at Springsure in the state’s Central Highlands.

The Harristown weighbridge, Byee and Cambooya have sold to undisclosed parties, while the Harristown silo complex in Toowoomba remains unsold.

One sold in NSW

This follows Furneys’ leasing of the site from GrainCorp for some years prior to purchase.

GrainCorp’s Birriwa and Eumungerie sites, also in the Dubbo region, are yet to be sold, as is Nemingha near Tamworth.

Victoria has seen a run of private grain storages built in recent years which offer growers more flexible receival standards than GrainCorp sites have often been able to offer.

Development in Victoria seems to be putting transport companies at the forefront of grain storage, and the leasing of GrainCorp’s Galaquil facility in the southern Mallee by Shannon’s Storage and Logistics at Beulah is one example.

GrainCorp’s Marnoo site in the Wimmera is under contract to an unspecified party, and the nearby facility built by Southern Ark recently sold to transport company, Watson’s Bulk Logistics, based at Bacchus Marsh west of Melbourne.

“It’s on an eight-hectare site so we can put a hay shed on it too; for farmers, these are good assets,” Mr Kennedy said.

Moulamein Grain Co-operative, which operates seven sites in southern NSW and north-west Victoria, has been leasing the Nandaly site from GrainCorp since 2009, and is now in the process of buying it.

The GrainCorp bunker and silo at Bridgewater on Loddon in central Victoria have been bought by Southern Stockfeeds.

Other GrainCorp sites currently under contract are Arkona, Goornong and Tarranginnie.