DROUGHT-DRIVEN domestic feed demand and alternative markets have supported prices for Australian pulses this year in the continued absence of their biggest export customer, India, according to the latest Pulse Australia Pulse Value Chain Guidance Note. 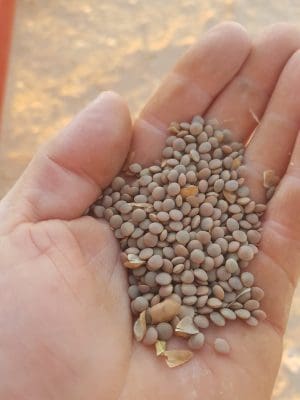 While lentil prices have remained on their long-term floor of $350-$400 per tonne because of big inventories domestically and globally, prices for chickpeas, faba beans, field peas, and lupins have all been trading largely in the middle to top third of historic prices.

“Chickpeas have been able to find suitable alternate markets, which could pave the way for a reduced reliance on India for the future,” Pulse Australia chief executive officer, Nick Goddard, said.

“Fortunately, there are large and attractive pulse markets outside India into which Australia has well-established trade routes, and these will continue to underpin the market opportunities for Australian pulses for the year ahead.”

Pulse Australia said India remained the largest variable in the global pulse supply-and-demand outlook, and its government-initiated Minimum Support Price (MSP) appeared to be having a minimal impact on the market, which had been trading below the MSP.

The Indian Government has continued to promote pulse planting during the current rabi, or winter-cropping, season.

Its Targeting Rice Fallow Area policy has been instituted in traditional rice-growing areas to encourage double-cropping with pulses and oilseeds, and boost Indian pulse production by 1.35 million tonnes.

“This is yet another initiative aimed at moving Indian closer to self- sufficiency in pulses.”

Mr Goddard said the Indian Government was holding large stocks of last season’s rabi crop, which were expected to be released to the market imminently to make space available for the kharif, or summer, crop now being harvested.

“Australian trade officials in Delhi see no easing of the trade restrictions until the end of 2019 at the earliest.”

Tariffs on chickpeas and lentils remain at 60 per cent and 30pc respectively, plus a 10pc social-welfare charge, with India recently extending restrictions on field-pea imports until the end of next month.

Pulse Australia reports India is around half way through planting its rabi crop, which will be harvested from March to May, and was expected to be smaller than the rabi crop harvested this year.

This is because monsoon rainfall from October 1 to November 7 for around 80pc of India, including several pulse-producing states, was below average, and plantings have been reduced.

“While late monsoon rainfall can change this outlook, these are factors to watch as the 2018-19 season unfolds.”

“The biggest determinant on next year’s pricing will be the size of this season’s Indian rabi crop.

“A smaller area, compounded with any unexpected drier weather will quickly eat into India’s stockpiles, and ultimately return India to a net importer of pulses.

“Conversely, an area planted similar to last year, with typical rainfall, will most likely result in trade restrictions remaining at least until the 2019/20 rabi crop is planted 12 months from now.”

“China’s current trade issues with the US, especially in relation to soybeans, are encouraging China to actively pursue other plant-protein sources.”

Mr Goddard said this had particular relevance for Australian lupins and faba beans as protein sources for feed, while the dried-pea market continues to be attractive for protein fractionation uses.

While Australia can and does export dried peas to China, Mr Goddard said other channels, including Australia’s domestic feed market, traded at values above what China was prepared to pay.

“Australia does not have access to the Chinese market for lupins or faba beans, and the slow progress in assessing priorities continues to frustrate.”

Pulse Australia said GIMAF and the Australian Government were pressing for lupins for feed to be granted market access to China, and China’s attitude on the subject provided some optimism.

Australia is estimated to have up to 300,000 tonnes of lentils in bulk and on-farm storage, a figure which would be significantly higher if stockfeed demand for lentils had not come about because of drought.

“Some recent large shipments to Bangladesh have served to eat into the Australian stockpile, but stocks still remain at levels that can be expected to keep prices low for the foreseeable future.

Field-pea prices have provided one of the bright spots in the pulse market, with values rising throughout the year, primarily in response to demand for feed.

“Traditional markets of Sri Lanka on splits, Bangladesh, China and Malaysia have continued to support Australian peas, with even India re-entering the market in recent months, despite the tariff free quota limits.”

Growers who took a punt on faba beans this year will be well rewarded, with prices reaching $800+ this season, or decile 10, a once-in-a-decade price level.

Demand for high-protein feed in drought-hit areas of NSW and Queensland has strengthened prices.

On faba beans, export demand has remained strong throughout the year from Egypt, which typically consumes around half the domestic crop.

Other Middle Eastern Markets have also maintained their buying of fabas, despite having to effectively compete with Australian feed millers and suppliers for the high-protein bean.

“The high-protein level of faba beans is also gaining the attention of the petfood industry, which may further improve the long-term prospects for this pulse.”

Domestic lupin prices have also remained firm, driven by the demand for protein in the face of feed shortages in drought-impacted areas of NSW and Qld.