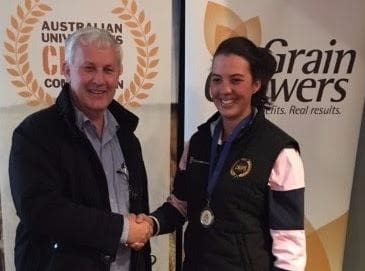 University of Sydney student, Nellie Evans, took first place in the individual category while the team trophy went to the all-girl team from Kansas State University.

Wet weather last week provided additional challenges to AUCC competitors over the three days with almost 35 millimetres of rain falling on the FarmLink Research Station, which hosted the practical component of the event.

The crops competition, an initiative of GrainGrowers, put tertiary ag students through their paces in a mixture of theory and hands-on tests covering agronomics and farm business management.

The rain didn’t dampen the commitment of the students who battled the conditions to inspect crops and compete in a series of practical assessments.

“Crops competition competitors are our farm advisers and agronomists of the future. In their future roles they will need to apply their skills in all sorts of trying weather conditions – including unrelenting rain,” he said. 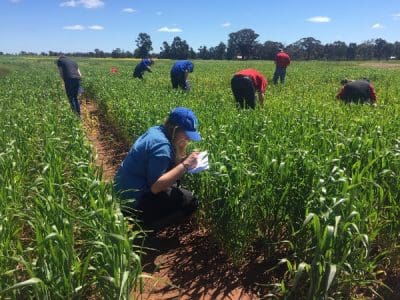 Students inspect a cereal crop at FarmLink Research Station, Temora, NSW, on Wednesday – the only day of full sunshine during the Australian Universities Crops Competition.

Dr Southan said the competition was about students being able to demonstrate their agronomic expertise and to network with industry representatives.

“This year there was an increased focus on connecting students with grains industry representatives including research, government and agribusiness professionals in the interest of developing career pathways and opportunities,” he said.

“A quiz night and industry dinner helped to introduce students to potential employers of the future.”

After completing her studies Ms Evans aims to pursue a career in broadacre agronomy extension.

She has been given the opportunity to take part in GrainGrowers 2017 International Study Tour to the US and Canada.

“I’m looking forward to returning to the United States – I have studied there before,” she said.

Dr Southan said the competition, now in its eighth year, continued to go from strength to strength.

“It is fantastic that Australia’s major agricultural universities continue to fund and support students to compete. In addition we again welcomed four international teams,” he said.

Past participants of the Australian Universities Crops Competition have gone on to successful careers in Australia’s grains industry including as agribusiness professionals, researchers, farmers, farm advisors, agronomists and grain traders.