NUCLEAR science is helping researchers understand how to improve wheat crops by analysing the growth of 140 wheat plants flown from South Australia to Sydney’s Lucas Heights in a specially-designed greenhouse laboratory.

Wheat is one of Australia’s top 10 exports, yet there are challenges as the nation’s agricultural soils are known to be deficient in zinc and other micronutrients critical to the growth of wheat.

Researchers from the Future Industries Institute at the University of South Australia are collaborating with a group of scientists at ANSTO to investigate a new class of micro and nano-scale zinc fertilisers for broadacre crops, such as wheat. 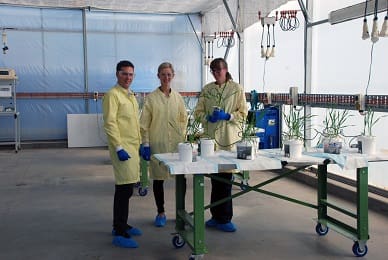 Dr Casey Doolette and PhD candidate Thea Lund Read from Prof Enzo Lombi’s lab at the Future Industries Institute are assessing if nano and micro zinc particles applied to leaves, can provide a more sustained supply of zinc to the crops.

The purpose of the study is to determine what form of zinc is the most efficient for supplying the nutrient to broadacre crops, with the ultimate aim of optimising crop management to increase crop yield and quality.

Nuclear science was used to understand how zinc is transported through the crop, and is based on the use of what are known as radiotracers to track the distribution of elements, in this case, zinc.

The tracer principle involves making a product slightly radioactive so that with certain equipment you can image it after it has arrived at a location it in a plant or in a person. In this study, the zinc particles were made radioactive using the OPAL research reactor.

The imaging technique used by the team has allowed for single plants, grown in the greenhouse at ANSTO for this study, to be measured at multiple points of time without having to harvest them.

ANSTO biologist, Nicholas Howell, captured a series of x-ray like images called autoradiographic images of the plants, which show how the distribution of zinc changes in live leaves, over time.

ANSTO environmental research scientist Dr Tom Cresswell was also part of the study, and applied his expertise in using radioactive isotopes as tracers in marine organisms to the plants.

“We use this technique to study all manner of things at the atomic level. It is slightly different working with plants, but the concept and application is essentially the same,” Dr Cresswell said.

“By using zinc-65 as a radiotracer, it is possible to detect exactly where the zinc goes after it has been absorbed by the plant.

“We would also be interested in knowing how much zinc is not taken up by the plant, as that zinc would be released into the environment with rainfall, and from the perspective of an ecotoxicologist, it is important to know if the zinc is affecting freshwater runoff.”

Dr Doolette said that ideally the applied zinc would accumulate in the grains of the plant, where it had the most nutritional benefit as food.

“By determining the most efficient form of zinc for direct foliar application, crop management strategies can be optimised to increase crop yield and quality,” Dr Doolette said.

The study and the use of zinc

The purpose of the study is to determine what form of zinc is the most efficient for supplying the nutrient to broadacre crops following its application to the leaves.

Zinc is used by the plant for protein metabolism, synthesis of hormones and in the production of essential enzymes.

Although zinc can also be delivered directly to the soil, there are some limitations due to soil conditions that affect its ability to address zinc deficiency in plants. When you deliver zinc to Australian agricultural soils, the zinc tends to get locked up, and is not readily available to the plants.

This occurs because zinc is largely immobile in soil and only moves short distances from the point of where the fertiliser is placed.

This includes through applying zinc in a soluble formulation, but that has a tendency to damage the leaves. If the zinc can be released slowly into the leaf, such as the case when it is applied in nano form, there is likely to be less leaf scorch.

The investigators are not focused on how the zinc, in the form of soluble zinc, is taken up but rather how much zinc is bioaccumulated. They are measuring zinc concentrations, as well as identifying where the zinc is transported in the plant, whether it be the new shoots, stems or grains.

How the study worked

Doolette and Read are evaluating two commonly used agricultural formulations, soluble zinc and chelated zinc (Zn-EDTA). In order to make this evaluation, they needed to use a combination of tools to understand zinc transport and bioaccumulation.

Plants were imaged, after one day, 14 days and at maturity (i.e. the production of grains) to evaluate the translocation and biodistribution of zinc.

Conventional analysis and imaging of zinc is limited because the naturally-occurring zinc in the leaves makes it difficult to identify newly-accumulated zinc.

The nuclear techniques available at ANSTO enable this to be distinguished.

The zinc particles for the experiments were made industry partner Sonic Essentials and were made radioactive using the OPAL research reactor.