Finding the balance in farming systems

NEW farming systems research on Queensland’s Darling Downs is working towards finding the impact of cropping rotations, intensity and nutrient strategies on productivity and sustainability. 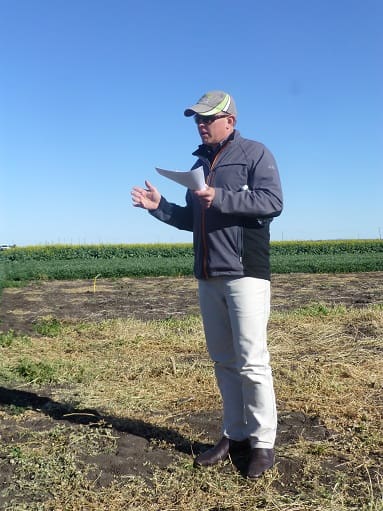 “Farmers have a whole range of levers at their disposal to influence how efficiently the system can convert rainfall into product and dollars,” Dr Bell said.

“This research is looking at some of the key levers, their impacts on water use efficiency and measurable soil properties like nutrient levels.”

The project is comparing 38 different farming systems, with variations in cropping intensity, crop choice, nutrient application strategies and other interventions such as the use of cover crops or manure.

Dr Bell said the site at Pampas, west of Toowoomba, was very fertile at establishment, with high soil phosphorus and potassium levels.

Based on the data collected in the first three and a half years, he shared five key insights around crop nutrition with the Agronomy Community.

“We are seeing big differences in the nutrient cycling between different crops in terms of the amounts being accumulated in fallow and the timing of that nitrogen availability,” he said.

Soil nitrogen accumulation was much higher after canola and legumes than after wheat.

The soil rapidly offered up 84 kilograms/hectare of nitrogen after canola, while only 21kg/ha of nitrogen showed up in the fallow after wheat, in tests taken in April 2016.

“This understanding is helpful if you’re designing a system that can capture the nitrogen from crops with a higher rate of nitrogen cycling,” he said.

But it wasn’t all good news from legume crops, with the pulses in the system utilising soil nitrogen before fixing atmospheric nitrogen.

“The nitrogen exported in grain from legumes exceeds that of wheat,” said Dr Bell.

“Any additional nitrogen fixed is often being exported from the system so that we achieved a similar negative nitrogen balance after the pulses to cereal dominated rotations.

“Based on our data, I wouldn’t be banking on any huge nutritional benefit from nitrogen fixation from grain legumes in terms of the long-term system nutrient balance.”

He added that legumes were also likely to be exporting more of other nutrients than expected.

“Grain testing has shown the legumes are removing a lot of phosphorus and potassium,” he said.

For example, in faba beans, 10 kilograms of potassium was removed in every tonne of beans at harvest, which was three times that of wheat. Phosphorus was removed at nearly twice the rate of wheat.

“Quantifying the nutrients removed with the harvest can greatly inform future decision making in terms of replenishing those nutrients,” Dr Bell said.

“The removal rates recorded in legumes in this research are higher than the regional rules of thumb, which goes to show the value of knowing how much is being removed from different paddocks, different crops and in different years.”

He encouraged growers to use grain testing to close the loop on nutrient budgeting.

“The grain test results showed that one tonne of chickpeas removed 10.7 kg of potassium – nearly three times more than one tonne of wheat at 3.7 kg,” Mr O’Mara said.

“This will add up for growers if they regularly include chickpeas in the rotation, particularly if they grow it with other higher potassium removal crops such as cotton and high yielding summer grains like sorghum or corn.”

The Nutrient Advantage laboratory offers grain testing along with soil and plant tissue testing to provide answers to growers and their advisers.

“We’ve added more nitrogen into the high intensity systems, but we haven’t produced a lot more grain in total than the lower intensity ones,” Dr Bell said.

“Yields are higher in the lower intensity systems, because there’s more stored water available for the crops and more nitrogen accumulating in the fallows.”

“In those systems with a higher fertiliser strategy, we’ve essentially balanced removal with supply so far, but we haven’t seen much in the way of a yield response,” he said.

“We are seeing some of the additional nitrogen supplied recovered in subsequent fallows and by future crops, so we can expect to get at least some of that extra nitrogen back. However, it may take longer than 12 months.”

He said the farming systems project was showing the value of maintaining a consistent approach which balances nutrition across the whole rotation.

Dr Bell sees similarities with Incitec Pivot Fertilisers’ long-term nutrition research at Colonsay, where nitrogen and phosphorus applied to each crop at 80kg/ha and 10kg/ha respectively is keeping the system in nutrient balance after 33 years.

Mr O’Mara said although some individual crops removed more than these rates, the overall system was balanced in the long term at these levels.

“The economic analysis from Colonsay suggests that the best long-term returns are achieved by using nitrogen and phosphorus together, but they are only positive when nitrogen is optimised at 80 or 120kg/ha,” he said.