RESISTANCE to one of the most damaging wheat diseases, yellow spot, has been bolstered with the discovery of 11 new genes that will help make future varieties less susceptible to the fungal pathogen. 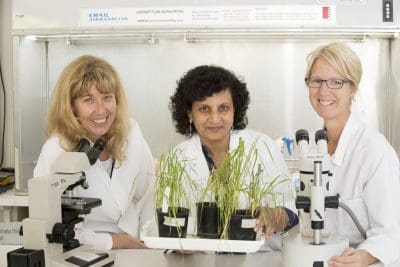 The Western Australian Department of Primary Industries and Regional Development has been working on a long running pre-breeding research collaboration, funded by the Grains Research and Development Corporation, which has identified a total of 19 genes with varying amounts of resistance to yellow spot.

Yellow spot is prevalent across the WA grainbelt every year, producing yield losses of up to 50 per cent and costing growers up to $30 per hectare in lost production and control costs.

Project leader, DPIRD senior plant pathologist Manisha Shankar, said before the project commenced, seven years ago, there was only one known resistance gene within the Australian germplasm.

Dr Shankar said the discovery of new resistance genes would give wheat breeders additional material from which to develop varieties with higher and more durable levels of resistance to yellow spot.

“Through this project we have been able to ‘stack’ a combination of three resistance genes, into 32 lines which have been ‘fixed’ and are adapted to the western and southern regions,” she said.

“Field and controlled environment trials have demonstrated that these lines are significantly more resistant than their parents and grandparents, providing confidence in the performance of the stacked genes. These lines are now being tested for yield and quality, while work has commenced on developing lines adapted to the northern region.

“In this second generation of the project, we are working on building gene stacks of four, five and six genes.”

More than 1000 lines of novel germplasm from around the world have been screened to identify resistant material, mostly from Mexico, via the International Maize and Wheat Improvement Centre CIMMYT), and the Middle East, from the International Centre for Agricultural Research in Dry Areas (IDARDA) project.

“The use of MAGIC is to fine map resistance genes and incorporate the highly recombined lines directly into breeding programs,” Dr Shankar said.

Another spin-off research activity from the project is assessing how individual genes perform in isolation and different combinations.

“We are testing the performance of isogenic lines with one, two and three gene combinations in both long season and short season backgrounds,” Dr Shankar said.

“The results will give wheat breeders more information and confidence in how these genes influence each other in various combinations, aiding and accelerating the wheat breeding process.”

The department continues to monitor the yellow spot fungal pathogen each year to determine whether it adapts to new resistant varieties.

“While tests have shown yellow spot is currently quite stable, it is important to stay ahead of the pathogen and to identify more genes and combinations of genes that can enhance resistance if it evolves,” Dr Shankar said.

The outcomes of the project’s pre-breeding research are regularly provided to Australian commercial wheat breeders, which then take seven to 10 years to develop a new variety.