COUNTRIES around the world are putting restrictions on the use of nitrogen fertilisers to decrease greenhouse gas emissions, and this, plus large input costs, prompted 2014 Nuffield scholar, Nigel Corish, to investigate ways to reduce his industry’s reliance on it. 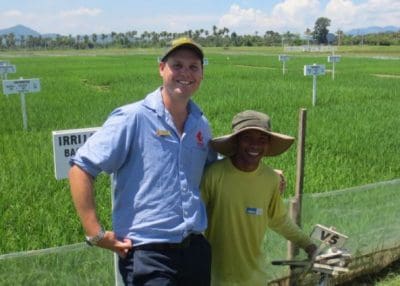 The Goondiwindi, Qld, farmer’s family has been growing irrigated cotton since the early 1980s.

Irrigated cotton is the main production crop, with about 4000 hectares grown annually. They also grow about 4000ha of dryland crops, including wheat, chickpeas and sorghum, as well as operate a lamb feedlot and run 130 head of Angus breeder cows.

At the time Mr Corish applied to Nuffield Australia, the costs for nitrogen (N) inputs on his farm were around $700 per hectare.

“While this increase in yield is partly due to the application of more nitrogen fertiliser, and it’s clearly an important input, I was keen to investigate ways we could use it more efficiently, and sustainably.

“My findings have surprised and challenged me, and have given me the knowledge and tools to really change some of our farm practices.”

Mr Corish’s Nuffield Scholarship, sponsored by the Cotton Research and Development Corporation (CRDC) and Cotton Australia, allowed him to investigate fertiliser use efficiency in irrigated cotton.

His two-year scholarship included travel to the US, Brazil, China and Europe to investigate how to reduce the use of nitrogen in particular.

“At the start of the Nuffield Scholarship I considered myself a progressive and adaptable farmer, but it has shown me there are always benefits to stepping away from the farm and local industry to travel and learn from others,” he said.

“Farmers around the world are improving Nitrogen Use Efficiency (NUE), and I really wanted to identify the management tools and practices they are using, especially those which translate into our local industry.

“For example, the use of new irrigation techniques to improve Water Use Efficiency (WUE) and reduce waterlogging, which in turn improves NUE.

“Many farmers overseas have moved away from flood irrigation to overhead sprinkler irrigators, which Australian cotton growers have been slow to adopt.”

Mr Corish’s research in the US and England showed that both dryland and irrigated farmers have introduced no till farming practices.

“While no and zero till farming practices are common amongst dryland farmers in Australia, irrigated cotton growers have not introduced these practices despite the overseas examples clearly demonstrating their benefits,” he said.

“The adoption of Precision Agriculture (PA) has also been much faster overseas compared with Australia, with tools such as imagery and real time soil testing improving NUE through the introduction of Variable Rate Technology (VRT).”

Mr Corish said ultimately, many of the tools and methodologies he came across were about ensuring the whole farming system was in balance, which enabled farmers to achieve high NUE.

“I have learnt a great deal from the growers, consultants and researchers that I visited during my Nuffield Scholarship, and changed my views on nitrogen management in cotton,” he said.

“I have found that to improve NUE, growers first need to improve the physical, chemical and biological properties of their soils.

“My Nuffield Scholarship has given me a greater focus on soil health, and shown there are a number of ways growers can improve nitrogen use in irrigated cotton, whether through soil health, application methods, alternative sources or the adoption of precision agriculture. Growers just have to look outside the box and be adventurous.”