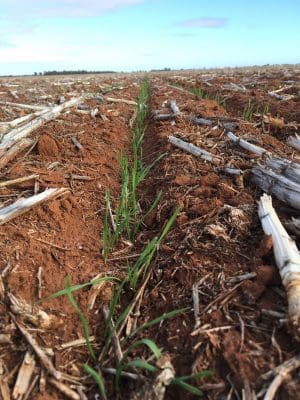 “If we see a wheat crop of 23Mt, we could see Australian wheat exports fall to their lowest level in nine years at 15.5Mt,” Rabobank senior grains and oilseeds analyst, Cheryl Kalisch Gordon, said.

The report said Australia’s 2018/19 winter-crop planting forecast at 21.6 million hectares (Mha) was in line with the five-year average, and two per cent down on 2017/18 areas.

“High-end yield prospects have been removed, certainly for canola, but increasingly for wheat and barley, with average yields, and in some cases less-than-average yields, considered likely,” Dr Kalisch Gordon said.

Depending on seasonal conditions, Dr Kalisch Gordon said the national wheat crop could come in at 18-28Mt, while a total winter crop of 28-44Mt was possible.

“Given the hot, dry summer and below-average rainfall in April and May, rain over the next four weeks is critical,” she said.

“While planting intentions remain strong, how these intentions play out is totally dependent on what falls out of the sky, and there are considerable downside risks to the outlook.”

Despite the challenging seasonal conditions, Dr Kalisch Gordon said many hectares had been planted dry in anticipation of germinating rains, and general rain in Western Australia in the past week had improved production prospects for this key export state.

“Dry-planted Western Australia crops will now have the chance to germinate in line with seasonal averages, and farmers will be able to finish their planting programs.

“Follow-up June rainfall will remain critical, but current forecasts suggest that it is on its way.”

While conditions in South Australia and parts of Victoria had marginally improved following rain in April and May, Dr Kalisch Gordon said their soil-moisture levels remained very low.

“Canola has been the earliest casualty to the dry, with planting intentions forecast to be down by 13 per cent across Australia to 2.4Mha.”

“This may have been reflected in much lower overall cropping intentions if the option to substitute to later-sown wheat and barley was not still on the table.”

Dr Kalisch Gordon said the later planting window for wheat and barley, together with strong cereal prices, was expected to drive a 6pc increase in area planted to barley in 2018/19 to 4.1Mha, and a marginal rise in planted wheat area to 12.3Mha.

“These lower-input-cost crops, together with lower-price volatility compared to alternatives, further underpin increased barley and wheat-planting intentions at this very uncertain time of the season.”

Rabobank’s report said the very dry start to the season in Queensland and New South Wales had driven domestic wheat and barley prices to multi-year highs.

“Driven higher by the lower availability of grain in the east, after last year’s smaller crop, it is the strong demand for feedgrain from livestock producers, and weaker prospects for the upcoming winter crop, that are underpinning record prices, particularly for barley.”

“As such, we are seeing improved relative pricing of these cereals compared to canola, but particularly lentils and chickpeas, and these relativities are expected to be maintained throughout the year.”

“We have seen US prices track beyond US500 cents per bushel in recent weeks as concerns over the North American crop continue, while there have also been reports of dry conditions in parts of the Black Sea region.”

For canola, Dr Kalisch Gordon said, reduced domestic plantings would also act as price support as the season progresses, but it was volatile Sino-US trade relations which were contributing to oilseed price strength.

“Despite the tariffs still being considered, Chinese soybean buyers are looking for alternatives to shore up supply, while pulse prices continue to be at the hands of the Indian Government, with no near-term prospects for the removal of Indian pulse tariffs.”