Barley flavour of the month in beer brewing debate

WHAT makes a perfectly flavoured pint? It’s been the obsession of brewers big and small for centuries. 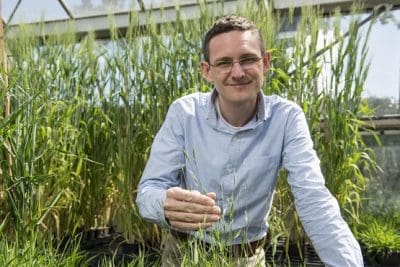 For some it’s the hops, others say it’s the water, or yeast. But the science of beer has just added a flavour to the mash…barley.

The discovery follows a five-year study involving researchers at The Sainsbury Laboratory, Norwich, United Kingdom, alongside colleagues in the United States.

Until now it was a widely-held brewing trade opinion that it was the malting process not the barley that contributed to the flavour and aroma of beer.

Additional flavour enhancements were provided the choice of hops, water and yeast. Or sometimes fruit, coffee, and spices.

Varieties of barley were chiefly selected for their suitability for the malting process and the efficiency with how barley is turned into sugary malt.

But many brewers insisted that certain barley varieties did contribute to flavour above and beyond the malting process. In addition to genetics, they believed, environment and location – what the wine industry calls terroir – also played a part.

And it turns out they are right, according to Dr Matthew Moscou, one of the authors of the study from The Sainsbury Laboratory, Norwich.

“The malting process directly impacts the wider profiles of flavour – how you get a pale ale, lager, or a porter – but what this study shows is that subtle flavour profile of the barley variety selected carries through that process,” he said.

“This provides the motivation to look into our seed base and start looking at those cultivars that were grown in the past and asking what kind of flavour profiles we can bring into modern breeding.”

The research project, which appears in the peer-reviewed Journal of the American Society of Brewing Chemists, set out to test the theory that barley cultivar and the place it is grown can affect beer flavour.

The cultivars were crossed and modern breeding techniques used to create a population of 200 lines of barley to observe useful field traits.

To test the hypothesis that “terroir” applied to barley flavour, they grew populations across three sites in Oregon, US.

The barley was harvested micro-malted and micro-brewed using a customised scientific approach that ensured consistency between batches.

Around 150 beers were prepared for sensory testing using a trained panel – people with sensitive palates employed by the brewing industry who know how to differentiate between a flavour wheel of 10 descriptors.

These qualitative tests on the beers and control beers were used to understand how genes, location, and the malting process influenced flavour.

DNA analysis showed genes in varieties associated with flavour and genes associated with malting suitability were in separate parts of the barley genome. The study found that the genetic effect was larger than the environment.

“But this study has shown that the flavour profile has little to do with the malting characteristics. That’s important because it says you can breed barley for malting…but you won’t necessarily be breeding for flavour.”

A striking characteristic of the work was that the majority of funding for the project came from brewers, including the The Flavour- 7 Pack (Bells, Deschutes, Firestone-Walker, New Glarus, Russian River, Sierra Nevada, and Summit) and the Brewers Association. Additional support came from maltsters and growers at Rahr Malting, Mecca Grade Estate Malting, and OreGro Seed. Work at The Sainsbury Laboratory was funded by the Gatsby Charitable Foundation.

For the full results go to: Effects of Barley (Hordeum vulgare L.) Variety and Growing Environment on Beer flavour in the Journal of the American Society of Brewing Chemists https://www.asbcnet.org/publications/journal/vol/2017/Pages/ASBCJ-2017-4860-01.aspx