EASTERN states bulk handler, GrainCorp Ltd, has taken in 1.023 million tonnes of grain in total in the 2017 harvest to date, up from 717,000t last Monday, as the Victorian harvest fires up and the Queensland one winds down. 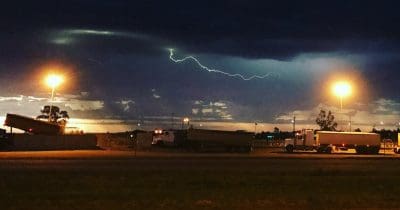 Storms in NSW have delayed harvest in the past week. Image: GrainCorp

The company said sporadic storm activity was delaying activity in NSW, where northern harvest was continuing, and activity in the south was ramping up.

GrainCorp said equipment and resources were being mobilised south to support harvest activity across Victoria and southern NSW.

The company has advised some sites would be operating by arrangement only.

GrainCorp said stated receival tonnages include some deliveries received prior to 30 September.