A TOAST to the farmers on South Australia’s Limestone Coast who are providing a key ingredient for beer lovers the world over to indulge a favourite pastime. 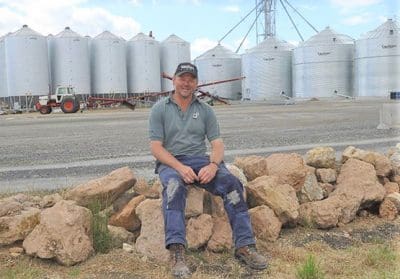 The region’s top quality barley is now sent around Australia and the globe for beer production via Naracoorte’s new silo storage facility at TE Storage and Logistics.

The six silos, with combined capacity of 9390 tonnes, were built after following the company’s successful bid in 2015 for a $250,000 Regional Development Fund grant from the South Australian Government towards the $2.5 million project.

TE Storage and Logistics owner and director Tom Hage said the storage facility was the only one of its kind for malt barley between Millicent and Keith.

The barley is stored at the silos before being transported to Cargill Malt Asia Pacific at Port Adelaide.

There, it is malted before being delivered to brewers in Australia and around the world.

“The grant gave us much-needed capital that allowed us to expand and provide a foundation for the growth of the malt barley industry in this region,” Mr Hage said.

“Farmers can grow more and deliver more. Their grain is stored in better conditions, leading to a better product.”

Mr Hage said the Naracoorte expansion supported local producers in a region where efficient storage and transport of produce is critical to meeting the demands of customers further along the supply chain.

“We’re the only storage facility for malt barley between Millicent and Keith,” Mr Hage said.

As the storage capacity has grown, so has the workforce.

Three years ago, Mr Hage was one of two people working fulltime for the company; now, he has six fulltime and three part-time staff members supporting him.

TE Storage also stores edible beans in an 8000-tonne shed. In addition, it has 10, 126-tonne upright silos in which it stores a CSIRO-developed gluten-free barley, released in 2016, that is exported to Germany.