UNHARVESTED wheat and barley in Victoria, southern NSW and eastern South Australia will struggle to make premium grades following an unwelcome 25-100 millimetres of rain and more in places over Friday and Saturday. 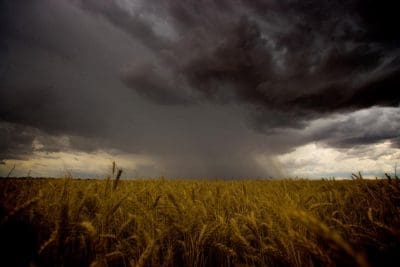 While some pockets of the southeastern Australian grainbelt escaped successive downpours and will be able to resume harvesting on Wednesday if the weather clears, most areas are forecast to receive further rain.

Most or all of the canola and pulses in affected areas has already been harvested. Growers and agronomists said it would be cereals that were likely to suffer most from rain damage.

Ground Up Agronomy’s Michelle Bammann, based in South Australia’s Mid North, said rain in recent days had delivered up to 50mm in places to follow on from 35-40mm last month.

“Between the strong hot winds and fire bans and then the rain, we’re struggling to get this harvest going, and some grain is already starting to turn black, but if it stays windy and cool, things might not get worse,” Ms Bammann said.

Barley and wheat yields for the region are estimated at a respectable 3-5 tonnes per hectare, but Ms Bammann said quality was now the issue.

“They’d already pulled out the falling numbers machines for the barley, and I can’t see any malting around.

“I don’t hold much hope for the quality after this rain.”

Further north, Cox Rural’s Jamestown branch manager, Jack Redden, said growers were around one-third to half way through harvest, and rainfall had generally been lighter than in areas to the south.

The canola and lentil harvests north of Burra are seen as mostly completed, and with a clearing outlook, harvest is expected to resume by Thursday and will move on to wheat and barley.

Rainfall was much lighter on the Eyre and Yorke peninsulas, where harvest for many growers was nearing completion prior the rain delay.

Landmark Birchip agronomist, Bruce Adriaans, said the district in northwest Victoria had 10mm of rain on Thursday night and the same again on Friday.

“Most growers here are two-thirds or three-quarters through harvest, and they should be able to get going again on Wednesday,” he said.

“There’s a bit of cloud around today but it’s cool and windy, which is good; often it’s that warm, humid weather after rain that does damage.”

Mr Adriaans said lentils had taken priority ahead of the widely forecast rain, and some wheat and chickpeas as well as canola were already in the bin.

“Some people are saying wheat is still hard to the touch, so that’s a good sign.”

More rain is forecast in coming days, and will further challenge the quality outlook.

Pine Lodge grower, David Cook, said his region east of Shepparton has had 64mm since Friday.

“We’d only done one full day of harvest before the rain, but it’s been quite breezy, and with some sun.

“We’ll get on to the canola as soon as we can because it will dry out quicker than the wheat, which is what we’ll do next.”

Falls across the Riverina and southwest slopes of NSW have stopped harvest, where progress is between 20-100 per cent complete.

Delta Agribusiness seed co-ordinator, Jamie Anderson, Lockhart, said most of the region’s growers had been around halfway through their harvest before 70mm of rain fell.

“The majority have got all their canola off, and it’s cool and overcast today after a bit of drizzle yesterday.

“The forecast is for more rain, and I can’t see too many getting going until the end of the week, so downgrading will certainly be an issue for a lot of the crops.”

Around 75mm of rain has fallen since Thursday in the Temora and Ariah Park districts, where harvest ranges from complete in western areas to around one-quarter through in eastern parts towards Young and Cootamundra.

These traditionally high-yielding areas on the southwest slopes have generally only completed their canola harvest and made a start on barley.

On the southern slopes between Wagga and Albury, most growers have finished their canola harvest and were into their wheat when the rain hit.

At Henty, some wheat was making H2 specifications, and could continue to do so if the weather fines up.

Forbes, in the central west of NSW, received some of the state’s highest falls, but growers in this district, and those to the west and north, have finished harvest. The Grains Research and Development Corporation (GRDC) has issued a warning to growers storing grain with a high moisture content.

In a statement, GRDC said high-moisture grain can lead to mould and insect growth, so storage experts are advising growers to take prompt action to avoid damage.

“Although many growers don’t have the equipment and infrastructure in place for drying grain, there are some other measures they can take to reduce the risk of grain being damaged in storage.”

Grain that is over the standard safe storage moisture content of 12.5pc can be dealt with by: blending; aeration cooling; aeration drying; continuous flow drying, and batch drying.

To find out more about how to manage high-moisture grain in storage, read the High Moisture Grain fact sheet or Grow Notes.