RIORDAN Grains has kicked off its 2018 bulk export program with the loading of a cargo of barley bound for China. 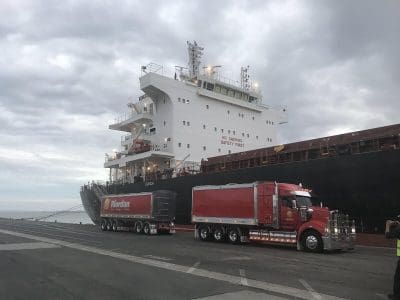 Riordan Grains is loading barley on to the MV Skywalker at Geelong this week. The cargo is Riordan’s first for 2018, and is bound for China.

The Victorian trader last year loaded 13 vessels which in total shipped 320,000 tonnes of barley, wheat and maize to export destinations, all from the Port of Geelong.

Riordan Grains general manager, Mark Lewis, said the company’s export program this year could be as small as half of last year’s total based on its commitments out to May shipment.

“This is the first one of the year, and it’s a very different market to 2017 with the impact the weather in the north has had.”

A tough growing season in Queensland and northern NSW has minimised the export surplus of cereals coming out of those regions, but kinder conditions have generated a significant export surplus in southern Australia.

“The domestic market has become the focus for the Newcastle and Port Kembla port zones, but Victoria, South Australia and Western Australia will still have big years for export.”

The company has become a presence in Victorian grain exporting alongside GrainCorp, which operates export terminals at Geelong and Portland, and Emerald Grain, which operates Melbourne’s only grain terminal.