THE Australian sorghum crop now in the early stages of harvest is forecast to produce 1.47 million tonnes (Mt), according to the Australian Crop Report released today by the Australian Bureau of Agricultural Resource Economics and Sciences (ABARES). 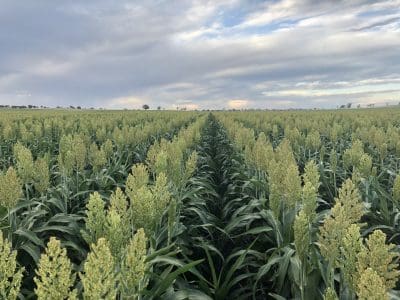 “Planting of summer crops is now largely complete, and planted area is estimated to have increased by two per cent to 1.3 million hectares,” ABARES executive director, Steve Hatfield-Dodds, said.

ABARES said this reflected unfavourable seasonal conditions which were expected to limit sorghum area in the late planting window, particularly in Central Queensland.

“Unfavourable weather conditions through the hottest months of the year prompted farmers to reconsider their crop planting strategies, which will result in less dryland crop area than anticipated and lower yields.”

Production of summer crops, including cotton, rice and sorghum, is forecast at around 4.3Mt in 2017-18, up 12pc from the previous year.

In contrast, production in Queensland and NSW is likely to be lower than the December 2017 ABARES crop forecast.

A tough growing season for much of northern NSW saw the state’s wheat crop at 4.5Mt drop an estimated 58pc from the 2016-17 figure, and come in only 500,000t above Victoria’s output.

This was despite the NSW area at 3.1Mha being double the Victorian area.

The Australian Bureau of Statistics (ABS) on January 8 released its preliminary estimates of planted area and production of wheat, barley, canola, oats and grain sorghum in its Principal Agricultural Commodities, Australia, publication.

The grain industry was surprised to see the ABS figure of 30Mt for the 2016-17 wheat crop, 5MT below the comparable ABARES estimates.

The ABS has met with ABARES as part of the review and has indicated that a number of factors could cause its ABS’ final estimates to differ from preliminary figures.

In past years, final crop estimates released by the ABS have often been higher than its preliminary estimates.

ABARES has reviewed and amended its own estimates of 2016-17 crop production, taking into account the latest available information, including export data and information obtained through industry resources.