STORMS in the past fortnight have brought 10-250 millimetres of rain to cropping areas of Queensland and northern NSW, disrupting the summer-crop harvest in some areas, but bolstering planting prospects for the upcoming winter crop in most. 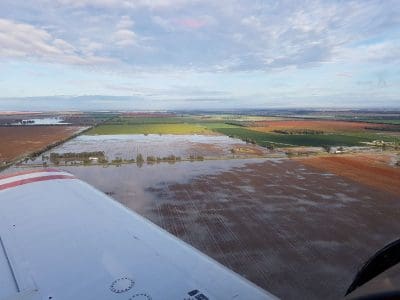 Storms leave their mark between Jandowae and Chinchilla on the Darling Downs.

The Northern Darling Downs of southern Queensland has had the bulk of the heavier falls, and Elders Jandowae agronomist, Janet Loechel, said most growers have had up to 100mm.

“We’ve got sorghum in water, and mungbeans floating off, but it’s not like that for everyone.”

“Whatever damage the rain does now, it’ll be good for the winter crop.”

Landmark Dalby agronomist, Daniel Skerman, said “very patchy” rain had delivered 100-200mm to some gauges west of Dalby on the Darling Downs, but others had received much less.

“A few mungbean crops will flower again and could put on another crop that’s better than the first one, and some sorghum might be damaged, but the rain has started filling soil profiles after a January when there was hardly any rain to speak of.

At Walgett, the outpost of cropping in northwest NSW, agronomist Greg Rummery said rain has been “stormy and patchy”.

“We have little subsoil moisture and our crop prospects hang in the balance.

“We’ll need some serious rain by early May from successive significant events to be able to plant a winter crop.”

Walgett can produce upwards of one million tonnes of wheat in a bumper season like 2016, but harvested very little in 2017 due to dry conditions.

“Even where we’ve had 50mm in storms, people were driving around in paddocks the next afternoon because the ground is so dry.”

Moree-based Poole Ag Consulting agronomist, Tim Poole,  said most farms around the district had received 30-100mm in the past fortnight, but some areas west of Moree had only registered 10mm.

Mr Poole said most of the region’s early sorghum had been harvested, and the rain could assist some of the later plant in grain fill.

He said some areas had good reserves of subsoil moisture left by the 2017 crop, which did not develop the biomass and root depth to use up what was available deep in the profile.

“That will bring barley area back to where it normally is.”

At Bellata, between Moree and Narrabri, agronomist Drew Penberthy said rain recorded in this latest round of storms had been disappointingly low for most growers.

“It hasn’t rained properly for 18 months in a lot of districts, and there’s no subsoil moisture to speak of, so 10-50mm won’t change things.”

“We’ll need quite a bit more than that to get a winter crop in,” Mr Rockliff said.

CQ has a very small summer crop in the ground this year, as the planting window for sorghum and mungbeans closed earlier this month prior to the first significant rain event of the season.