Harvest lupins for seed sooner, rather than later

LUPIN growers looking to retain seed have been advised to harvest crops as soon as possible, rather than risk poor crop establishment from grain affected by rain. 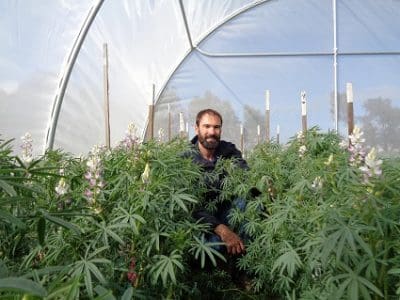 DPIRD research officer Martin Harries with Jurien lupins that were part of a trial that quantified how rainfall on mature crops impacts seed germination rates.

Research by the Western Australian Department of Primary Industries and Regional Development (DPIRD), supported by the Grains Research and Development Corporation (GRDC), has found a reduction in germination rates of up to 40 per cent in seed from wet lupin pods.

“Laboratory experiments using the varieties Jurien, Mandelup and Gungurru showed seed exposed to one wetting and drying cycle reduced seed germination by five to 10 per cent, two cycles by 10 to 20 per cent and three cycles by 35 to 45 per cent,” he said.

“These results were reflected in field trials using the same varieties under simulated conditions using no irrigation, one, two and three irrigation treatments.

“After each treatment, or simulated rainfall event, germination rates fell by an average of four to 10 per cent for each wetting and drying cycle.”

Mr Harries said while many variables could influence the severity of rain damage on wet pods, the impact on germination rates was conclusive and the reduction in seed quality was even greater than expected.

“Each weather event causes what is referred to as ‘accelerated aging’, where each time it rains germination process starts again, depleting seed vigour,” he said.

“The more times the mature plant is exposed to rainfall, the more its energy reserves are reduced, along with its ability to establish as a healthy plant, which ultimately impacts on yield.”

Mr Harries said that with widespread, variable spring rainfall this season and crops maturing at different times, it was important for growers to evaluate their harvest program carefully and to prioritise lupin crops destined for seed.

“While lupins can stand up to some weather events without shedding, crops destined for seed should be harvested as soon as possible to avoid the risk of rainfall reducing the production potential of next year’s crops,” he said.

“Good seed comes from paddocks that have grown well, with good nutrition that have not been exposed to rainfall.”

Mr Harries advised growers to get their lupin seed tested before sowing, even if harvesting early, to make sure they have quality seed for next year’s plantings.

“Storage over summer is also important and aeration is a good way to maintain the quality of the retained seed, while testing help growers know what they are getting,” he said.

The GRDC Fact Sheet ‘Retaining seed’ has information about managing weather damaged seed and storage available on its website, while seed testing services provided by the department’s Diagnostic Laboratory Services can be found at agric.wa.gov.au