HEADER fire prevention and insurance issues, and managing the pest and disease challenges thrown up by the surge in chickpea production, will be top priorities for Grains Research and Development Corporation (GRDC) research and development investment in coming months. 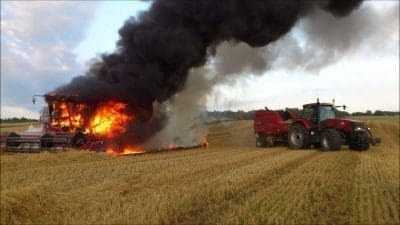 Research into harvester fire prevention and insurance will be a top investment priority for the GRDC.

Drawing on grower feedback from a fact-finding tour by the GRDC board of south-west Queensland and northern NSW this week, board chairman, John Woods, said those were the two standout issues raised by growers.

“The GRDC is in consultation with the industry to look at what additional R&D we need to do to try to mitigate the fire issue with headers,” he said.

“We also want to work with industry to assist them to approach the insurance and underwriting industry to see what else we need to do to assist growers who are not getting access to reasonable insurance rates on their headers.

“We will be looking at a package for fire mitigation and will work with the industry to see what that might look like, then talk to the insurance industry, to safeguard headers.

“If we try to make the relevant mitigation measures we should also try to decrease the impact of insurance as best we can.”

Mr Woods said there was some urgency to addressing the issue and the GRDC would focus on getting it done quickly.

“We are on our bike now working with industry to put up whatever R&D we need to try to assist growers charting that course,” he said.

“The word is from insurers that they are under pressure to increase insurance rates for growers. It could be very difficult for contractors to pay what some insurers may like to charge. All those charges get passed back to growers, so whatever we can do we will look at to mitigate that.”

With chickpeas becoming a mainstream crop in the north and growers likely to go big with chickpea plantings again this winter, Mr Woods said the GRDC was very aware of the pressure that could put on farming systems.

“We really need to ensure we are doing productive resourcing, particularly with the soil constraints on chickpeas with things like nematodes, phytophthora and leaf diseases,” he said.

“There is a lot of pressure to shorten the crop sequencing with chickpeas because of the price. It is not just the good price for chickpeas, but the price of chickpeas in contrast to the low price of cereals and other crops. It will certainly put increased pressure on growing them.”

“There could be a medium-term effect in our cropping system. We need to look at what the research implications are if people start shortening up chickpea planting, particularly from a disease and nematode perspective,” he said.

“It won’t be simple. Phytophthora is a very difficult thing to manage and nematodes aren’t simple when we are trying to rotate.”

With growers paying a levy to the GRDC of 0.99 per cent of the farm gate value of their grain, Mr Woods said it was too early to determine whether the recent bumper winter crop harvest across Australia would be a windfall for GRDC coffers.

“Given the crop size, we aren’t exactly sure, particularly with the selling intentions of growers that have changed over the years. How the crop is sold will determine the timing of the levy inflow into the GRDC. That is difficult for us to forecast because growers make that determination,” he said.

“This year a lot of growers around Australia are holding more grain in February than they normally would, partly because of market conditions. That can potentially have a short term, negative impact on GRDC finances. We don’t really know.

“It has been a big production year for legumes, so there will obviously be increased levy flow from that. But cereals are well down on the four-year average, even though the tonnages are up. The prices are well down and our levy is a direct reflection of yield-times-price.”

Mr Woods said the GRDC Board had recently considered a range of strategic opportunities in the event of a substantial increase in levy inflows.

“We are very conscious of investing growers’ money in the strongest investment we can make and that it is aligned to growers’ interests. We don’t want to be investing in B and C grade activities just because we feel there is more money to invest. We want to make sure they are A grade,” he said.

This week’s GRDC board tour included meeting with grain growers in Goondiwindi, Mungindi and Walgett, before visiting researchers in Toowoomba.

It also included a tour of the University of Southern Queensland (USQ) to see a jointly-funded initiative between USQ and the GRDC. 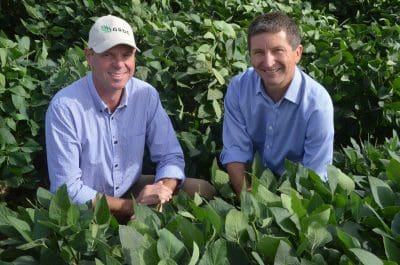 The $10 million investment includes $2 million from GRDC for stage one, and will result in an expansion of the Centre for Crop Health’s glasshouse, laboratory and outdoor trial-site capacity, and delivery of a new centre for the study of biopesticides.

The initiative aims to bolster Australia’s ability to protect its multi-million-dollar broadacre industries against plant disease and biosecurity threats.

“Being involved with USQ in this plant pathology and biosecurity project is a key move for the GRDC, allowing us to support plant protection research into crops like sorghum, sunflowers and mungbeans,” Mr Woods said.

“On a broader note, joint partnerships like this give researchers the capacity to develop integrated solutions to provide sustainable and progressive cropping options for Australian grain growers.

“Going forward the GRDC’s ability to support and collaborate with other organisations will be one of our greatest strengths and will encourage us all to think outside the square in terms of R&D that benefits our industry.”