THE Camm Agricultural Group (CAG) has listed its large-scale irrigated and dryland cropping property, Morocco, in southwest Queensland for sale with development approval for a feedlot with a licenced capacity of 26,320 Standard Cattle Units. 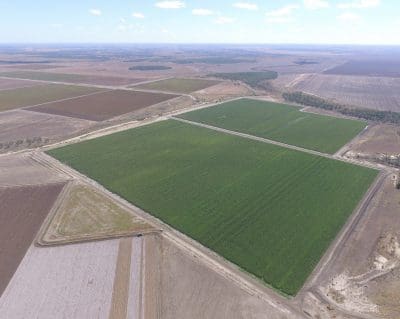 Located between St George and Surat, Morocco covers 5939 hectares, and includes 270ha of irrigated cotton and 265ha of irrigated chickpeas, as well as 850ha of dryland sorghum which has benefited considerably from recent rains.

CAG CEO, Bryce Camm, said the property was being sold because expansion at its Wonga Plains feedlot near Dalby meant capacity could now be added to an existing operation.

“We originally bought Morocco for the opportunity it gave us to expand our feedlotting capacity, and do backgrounding,” he said.

“With the expansion now taking place at Wonga Plains, we’ve decided Morocco is something we no longer need.”

It features 930ha of flood irrigation, a water allocation from the Balonne River, and a storage capacity totaling 19,000 megalitres, with scope for expansion.

Morocco has 3000ha developed for dryland cultivation which is well-suited to chickpea and wheat production, and the property has a mix of land and soil types.

The property is listed with Tom Warriner and Simon Cudmore at CBRE, and Richard Brosnan at Ray White Rural Rockhampton.

Mr Warriner said country in the wider St George district was attracting attention for its cropping value and scope for development.

“With movement in property prices around Goondiwindi and Moree, people are starting to see a lot more value in places like Morocco.

“As people discover the development potential in the area, we’ll see more and more interest in buying.”

Mr Warriner said the acquisition of additional water licences would allow for considerable further development on Morocco, which has produced cotton crops with yields as high as 11 bales/ha.

In a report published earlier, Heron Todd White’s Roger Hill said medium-priority water used for broad-scale irrigation in the region had been trading at $1750 to $2200/Ml, and had peaked at around $2500/Ml for allocations close to St George.