Is this Australia’s best ever canola crop?

A TASMANIAN farmer could be the Australian canola yield record holder after harvesting a massive crop last week. 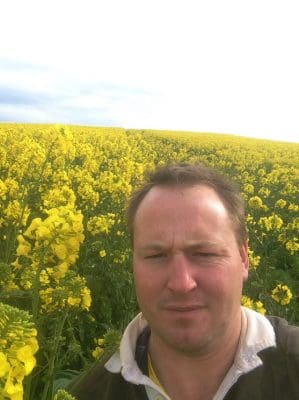 Michael Nichols takes a mid-season selfie in his canola paddock.

Cropping manager at Redbank Farm at Sisters Creek in the state’s northwest, Michael Nichols, finished harvesting his paddock of Hyola 970CL canola on January 11, stripping 52.52 tonnes off 8.5 hectares for an average yield of 6.17 tonnes per hectare.

The haul, his fourth ever canola harvest, was assessed on a weighbridge at a nearby Impact fertilisers depot then stored on-farm.

The effort could also see him take the number four spot in the world, though no official records are kept.

Mr Nichols said the result could be attributed to a mild finish to the season.

“Because it was a mild spring and summer, the pods could mature and didn’t dry out and fall off due to heat stress.”

He said while Sisters Creek received a record 2150mm of rainfall in 2016 (the average is 1200mm), the wet season hindered rather than helped the crop.

“We planted the canola on April 27 and up to the beginning of May it only had 150mm, so it basically got two metres of rain after that.

“Considering last year our 970 went 5.8t/ha with three times less rain, I think 1200mm could have been the magic number this season.”

Mr Nichols said the canola was so tall he had to apply growth regulator to improve harvestability. 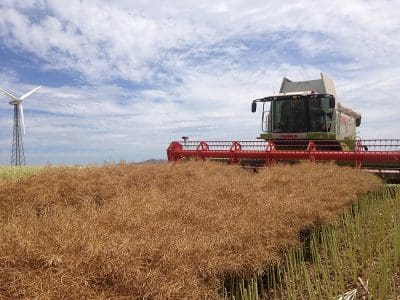 Michael Nichols tried direct-heading the canola to no avail.

“I tried direct-heading a 50-metre strip and it was not enjoyable, so we decided to windrow and harvest.  At 8 feet tall, it was too big to direct-head as you risk snapping the crop.

“I applied AgriPhos (1L/ha) and Folicur (150mL/ha), which shortened the crop a couple of inches and added a level of protection.”

“I was going about 3km/hr which is about standard, as there was a lot of product doing through the machine and I needed to keep it steady.  On the mainland that is definitely considered slow.”

“Because the 970 is so vigorous and tall, it gives good weed suppression, so the Intervix activity took out the weeds early on.”

The fertiliser program consisted of sulfate of ammonia at 120kg/ha and a urea/muriate of potash blend at 200kg/ha. 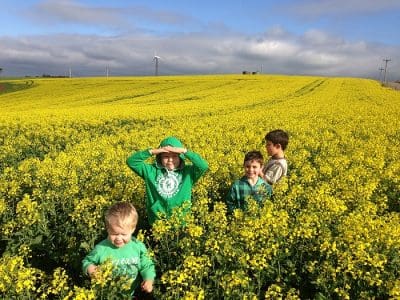 The farm is also home to Nichols Poultry, run by his brother Tristan, and Hillfarm Preserves, run by production manager Kurin Luttmer.  His mother Carolyn recently retired from the preserves business.

Their cropping program consists of mustard seed, poppies, potatoes, onions, wheat and canola over six rotations of 30ha across 180ha of their arable land for cash and to go into the preserves.

“The six rotations reduce disease and weed burdens on farm, and the soil always works better after the canola due to its root structure.”

The closing of a vegetable processing plant in the state prompted the family to diversify and invest in canola oil.

“The oil business is ticking along nicely.  We’re providing chickens with canola meal and the cold pressed canola oil is going mostly to the Japanese catering market, as they prefer the GM-free status.  We go through about 120 tonnes of seed a year and produce roughly 50,000 litres of oil.”

This year the Nichols will again plant Hyola 970CL, hoping for another magic number.