Keep it simple when it comes to nitrogen

GROWERS should `keep it simple’ when it comes to planning their nitrogen (N) fertiliser strategies for wheat and place more focus on N rate rather than application method and timing. 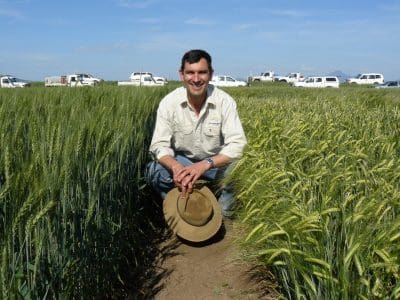 A series of 15 research trials conducted by the Grains Research and Development Corporation (GRDC) funded Northern Grower Alliance (NGA) over the past three years found that the rate of N applied was consistently the dominant factor affecting yield, grain quality and economic returns.

NGA has been heavily involved in projects focussing on N application strategies in wheat with the initial aim of assisting the management of high yielding, and frequently lower protein achieving, varieties such as EGA Gregory or Suntop.

One aspect of the research compared the impact of urea incorporation with surface spreading alone.

“All sites were nitrogen responsive, with significant grain protein responses to nitrogen rate in all trials,” Mr Daniel said.

“Across 22 comparisons of equivalent N application rates, the crop response has been the same regardless of whether we incorporated the urea at sowing or simply surface spread immediately after sowing.

“That is not to say we aren’t losing ‘a quantity’ of N via volatilisation when urea is simply surface spread. It is however indicating that the levels of loss have been low and were not sufficient to measure any difference in crop performance at any of the sites over the last three seasons.”

In Queensland and NSW, growers typically apply nitrogen fertilisers such as urea directly into the soil (banding) or broadcast it on the surface then incorporate.

This is done to reduce the potential for ammonium containing (e.g. sulfate of ammonia) or ammonium producing (e.g. urea) fertilisers volatilising into the atmosphere as the gas ammonia.

A range of N application timings were also evaluated as part of the research. A split application of N (50 per cent incorporated at sowing and 50pc spread at GS30) was evaluated in all trials, while early and late fallow applications were included in 2015 and 2016.

The results confirm that in-crop spreading can be a useful tool to capture upsides in yield and grain quality when seasons are favourable however the practice is unlikely to become standard practice in the north due to the variable nature of late winter and spring rainfall.

Fallow N applications were evaluated in 2015 and 2016 and have generally provided equivalent results to the same quantity of N applied at sowing.

In trials where differences were evident, Mr Daniel said the impact appeared to be linked to other agronomic issues such as seedbed soil moisture disturbance (negative impact on establishment and yield) or breaking up of high stubble loads prior to planting (positive impact).

“A large focus of this work was to examine whether adjusting timing (or method) of N application could assist in the management of wheat varieties with low protein achievement,” Mr Daniel said.

“Unfortunately, the conclusions to date are that these tools are of minor impact with N rate the key driver. The work however has also helped to generate a large trial data set that indicates the losses from surface spread urea are much lower than previously expected.

“If there is one message to stress from this work, it is to keep N application simple. The benefits from adjusting timing and method appear relatively minor and growers may be better off applying when and where it suits other operations. Getting the N rate right appears much more important than timing or method.”

“Another key message from this work has been that despite significant protein (and sometimes yield) benefits with increasing N rate, the highest net returns have nearly always been achieved from using 50 units of N/ha.”

For more information on NGA’s trial work on N management, download a copy of NGA’s 2015 and 2016 Update papers from the research and development section of the GRDC website www.grdc.com.au or visit https://grdc.com.au/Research-and-Development/GRDC-Update-Papers/2016/03/Nitrogen-management-in-wheat-2015 and https://grdc.com.au/Research-and-Development/GRDC-Update-Papers/2015/02/Nitrogen-management-in-wheat-2014