WITH the 2017 cropping season shaping as a high risk year for barley leaf rust and wheat leaf rust in Western Australia, it is not too late for growers to control regrowth from last season’s crops that can harbour rust pathogens. 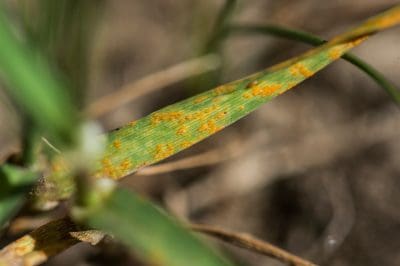 Barley leaf rust can reduce grain yields by more than 30 per cent when infections are severe. (Photo: Evan Collis Photography)

Regrowth containing rust can pose a significant problem for early infection of this year’s crops.

This is the message from Department of Agriculture and Food (DAFWA) researcher Kith Jayasena, who conducts research as part of a Grains Research and Development Corporation (GRDC) investment that aims to reduce crop losses and management costs attributed to crop diseases.

“The barley varieties infected by rust were mostly Bass and Oxford and plants were at the ear emergence stage,” Dr Jayasena said.

“Infected wheat plants included the variety Mace and were at the grain fill growth stage.

“I encourage growers to be vigilant in spraying crop regrowth and not to neglect areas such as fence lines or land around infrastructure such as silos.”

Dr Jayasena said selection of varieties with adequate levels of rust resistance was an important strategy for managing rust and understanding the resistance levels of varieties sown was paramount for effective management during the season.

“For barley leaf rust, select a foliar fungicide mixture which contains azole (such as epoxiconazole or cyproconazole) and strobilurin (such as pyraclostrobin or azoxystrobin),” he said.

“Barley varieties with APR are susceptible to leaf rust at early growth stages and can express moderate levels of resistance as they age.

“If infected, these APR varieties will respond to the application of foliar fungicides during elongation and booting.”

For wheat, Dr Jayasena said varieties ranged in their resistance levels to leaf rust – from susceptible to resistant – and relied on a combination of APR and/or single gene resistance.

He said trials conducted by DAFWA plant pathologist Ciara Beard in 2016 as part of a GRDC investment had refined recommendations for foliar fungicide timings for leaf rust in the popular variety Mace.

Dr Jayasena said the results showed foliar fungicides should be applied as soon as wheat leaf rust was found in the paddock or nearby.

“Optimum timing for the control of leaf rust in Mace is during the period of flag leaf to head emergence,” he said.

“Foliar fungicide application during or after crop flowering is not likely to be effective.”

Dr Jayasena said two wheat leaf rust pathotypes – that were first identified from WA by the University of Sydney’s Plant Breeding Institute (PBI) in 2013 and 2015 – were both present in the trial and caused significant yield losses in Mace where fungicides were not applied.

If rust is detected on crops, samples should be sent to the University of Sydney PBI for pathotype analysis.