Mice in the sights of major new research thrust

AUSTRALIA’s largest investment into mouse-related research in the grains industry has been announced by the Grains Research and Development Corporation (GRDC). 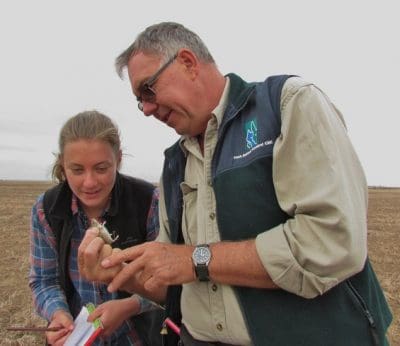 The GRDC is injecting more than $4.1 million into mouse control research, development and extension (RD&E) initiatives in response to the increasing prevalence of mice in many key grain-growing regions of Australia.

GRDC managing director Dr Steve Jefferies said the GRDC recognised the enormity of the mouse problem and the severe impact it had on growers’ businesses, their families, their communities and the broader industry.

“The issue with mice has escalated in recent years and we need to improve our understanding as to why that has happened so we can provide growers with innovative and more effective mouse control options and tactics,” he said.

The new initiative includes three key investments that will be led by CSIRO.

The first investment of more than $3.2 million focuses on understanding mouse ecology, biology and management, the second on increasing surveillance, and the third on mouse feeding preferences.

The first investment will provide growers and industry with a greater understanding of the behaviour of mice under no-till and stubble retention systems, and it will quantify the impact of various management tactics (such as strategic tillage, seeding systems, food and habitat reduction) on mouse numbers.

Until now, management strategies to control mice have been based on research conducted under conventional cropping systems which often incorporated tillage, burning and removal of stubbles, as well as more livestock than is typical of today’s farming systems.

“Our farming systems have changed markedly since then,” Dr Jefferies said.

“No-till, stubble retention and in many cases little or no livestock are now the norm in many areas, so we need to know whether these contemporary, conservation farming practices are now favouring the persistence of mouse populations from one season to the next due to maintenance of year-round habitat, lack of soil disturbance, or whether there are other factors at play.

“We are no longer seeing a plague situation one year, followed by a sudden crash in the population and the absence of mice for extended periods of time thereafter. These days, mice seem to be a constant and our high-yielding crops and heavy stubbles appear to be providing them with an abundance of food and protection.”

Technologies such as in-burrow cameras and radio-tracking devices are expected to be used during the studies to better understand mouse behaviour.

The second key investment of more than $630,000 will expand and extend GRDC’s involvement in national mouse monitoring and surveillance.

The aim is to develop a more precise ‘real-time’ national early warning system for potential plagues and equip growers with the ability to proactively manage increases in mouse populations to minimise crop losses and reduce economic impacts.

The third key investment commits up to $275,000 to investigate mouse feeding preferences and bait efficacy.

Broad scale application of zinc phosphide wheat bait (at the prescribed rate of one kilogram per hectare) is currently the only method available for growers to control mice in their paddocks, but efficacy of this bait has become an issue.

An investment in this area will explore conditions which lead to the apparent reduction in attractiveness of zinc phosphide baits and subsequent lower efficacy.

The two key questions relate to the role of background food availability on baiting efficacy, and whether there are more suitable bait substrates.

“It appears mice have an aversion to the wheat-based bait in some situations,” Dr Jefferies said.

“This could be due to the availability of more appealing alternative food sources, such as barley and pulses, so the GRDC and its research partners will be endeavouring to determine if this is in fact the case.

“Researchers will also be investigating whether mice stockpile non-baited grain and other food sources in order to survive, and if so the research will aim to determine the optimum time to bait to overcome this mouse survival technique.”

GRDC manager pests, Dr Leigh Nelson, said the GRDC was committed to exploring all options in an effort to provide growers with better mouse control solutions.

In addition to the new investments, Dr Nelson said the GRDC continued to support a wide range of other ongoing mouse-related RD&E.