PACIFIC Seeds has released a new wheat variety, LRPB Mustang, that has been bred by LongReach Plant Breeders to exhibit high yield, quick maturity for main season planting and an Australian Prime Hard (APH) classification in Queensland and NSW. 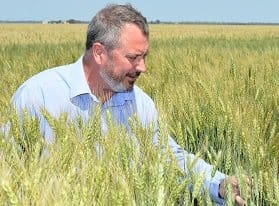 “In trials from 2012 to 2017, Mustang showed a yield improvement of three per cent over Suntop, 5pc over EGA Gregory and 10pc over Spitfire,” Mr Comben said.

“As you would expect with a quicker maturity wheat, the highest yield improvement was in the under four tonnes/hectare trial groupings.”

Mr Comben said Mustang had also been compared to the other quick maturity Northern Region varieties in National Variety Trials over the last two years.

“The data clearly shows that Mustang delivers a step up in yield and provides growers with a later sowing option that can match the best of the mid-season varieties like Reliant.”

He said the new addition strengthened the company’s APH portfolio for the northern region.

“We know there is no such thing as an average year and there are many factors that can influence the timing of the planting operation.

“The Pacific Seeds range of APH wheats for Queensland and NSW has been bred to encompass the full range of maturities to give growers choice in their program while still providing the quality and agronomic package needed for success.

“Whether growers are looking for early or late planting options, reliability in tough conditions or exceptional protein accumulation, we have a wheat variety that will meet the industry’s needs.”

Mustang is available for purchase and sowing in the 2018 season from select seed associates and rural retailers.