Australian Grain Technologies (AGT) have secured a quality classification upgrade for Cutlass wheat from APW to AH, and an AH classification for Scepter wheat for the 2018 growing season in the southern New South Wales region. 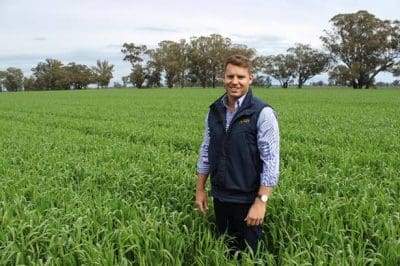 Initially released in 2015 for Victorian and South Australian growers as a Yitpi replacement, Cutlass has strong photoperiod sensitivity which offers growers more sowing date flexibility, being suitable for planting from mid April to early May.

Photoperiod sensitive varieties like Cutlass only flower when the days get longer, and therefore may avoid earlier season frosts that much of southern NSW have experienced in recent years.

Importantly, Cutlass has performed well in both the early and main National Variety Trials in southern NSW, with yields being consistently high and proving it’s flexibility for inclusion in grower programs.

“The upgrade in classification of Cutlass from APW to AH will allow farmers to potentially receive an additional $15-20 per tonne on average for their grain come harvest time.  Combined with a 9 per cent yield increase compared to EGA Gregory, farmers who grow Cutlass are looking at a significantly more profitable investment again this season,” AGT’s southern NSW marketing manager, James Whiteley, said.

Cutlass seed is available through AGT Affiliates, and able to be traded between growers as part of AGT’s Seed SharingTM initiative.

It performs very well in tough seasons where drought stress is an issue, having the ability to maintain yield whilst also expressing high test weights and low screenings.

Scepter is adapted to a wide range of environments and soil types whilst offering strong yellow leaf spot resistance, giving growers a high yielding option in wheat on wheat situations.

National Variety Trials in southern NSW have consistently demonstrated the ability of Scepter to deliver improved yield in comparison to other main season varieties.

Previously unclassified, grain from Scepter crops delivered into southern NSW receival points will be eligible for the AH quality grade for the coming harvest.

This brings the classification of Scepter for southern NSW in line with South Australia, Victoria and Western Australia where it is fast becoming the leading wheat variety grown.

“Scepter being classified as an AH variety is a great outcome for southern NSW growers.  We know there is already a significant area of this variety being grown across Australia due to its adaptability and yield profile. Receiving an AH quality classification means southern NSW growers can now add Scepter into their cropping programs to help boost returns,” Mr Whiteley said.

West Wyalong grower and agronomist, Paul McCaskie, NSW, trialled Scepter in 2016 and has expanded his planting for 2017 whilst also taking advantage of AGTs Seed SharingTM initiative.

“Scepter appears to be a versatile variety that performs across different seasonal conditions.  In the favourable 2016 season we saw Scepter keep up with other varieties and, with the way that the heads fill quickly, it has the ability to maintain yield capability in drier conditions,” he said.

Scepter is available through AGT Affiliates, local retailers and is able to be traded between growers as part of AGTs Seed SharingTM initiative.