MILDER than average winter temperatures have promoted a surge in oat and corn aphid numbers in south-eastern Australia. 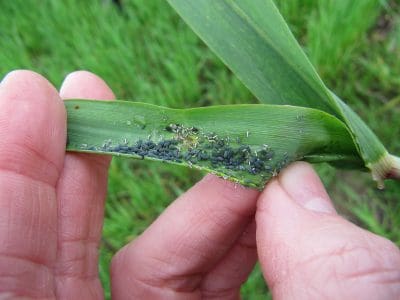 Aphid numbers have been building up in cereal crops across south-eastern Australia. Photo: A. Weeks, cesar

Oat aphids and corn aphids have been detected in high numbers in many locations in Victoria’s Mallee, Wimmera, Northern Country and North East, with some populations of oat aphid found cohabiting cereal crops with Russian wheat aphid (RWA).

Similarly, high populations of oat and corn aphids have been reported in wheat and barley crops in the NSW Central West Slopes and Plains, and Riverina regions.

Reports have been received by cesar entomologists who co-ordinate the PestFacts south-eastern electronic newsletter service.

Cesar’s Paul Umina said oat and corn aphids could invade crops at any time between seedling stage and grain fill.

“Late infestations on leaf sheaths and flag leaves between booting and milky dough stage can result in yield losses,” Dr Umina said. “In some cases, aphid colonies infest the seed heads and congregate in large numbers.”

“An established economic threshold for oat and corn aphids in winter cereal crops is 15 aphids per tiller on 50 per cent of tillers, where yields are expected to surpass 3 tonnes/hectare,” he said.

Given that forecast conditions are likely to favour the ongoing build-up of aphids during tillering and stem elongation, chemical controls may be warranted before populations peak.

“However, keep in mind that corn aphid populations naturally decline as the crop starts to boot and approach heading,” he said. “Similarly, host suitability may decline as cereal crops become reproductive with respect to oat aphid infestations.”

Dr Umina said the feeding damage caused by oat and corn aphids was quite different to that caused by the recently-introduced RWA. RWA injects salivary toxins in addition to removing nutrients during feeding, and thus economic thresholds for this pest are by necessity different to other cereal aphids.

RWA is likely to warrant chemical control if infestations exceed thresholds of 10pc of tillers infested through the high-risk period of early booting to soft dough (GS40-GS85).  During this period, protecting the top three leaves is a priority to minimise yield losses.

“Where spraying for oat and/or corn aphids is required, growers are encouraged to consider use of selective insecticides (such as pirimicarb) instead of broad-spectrums as they are less harmful to beneficial insects and therefore less likely to induce a secondary pest outbreak of other aphids and/or caterpillars such as armyworms,” Dr Umina said.

“This is particularly relevant at the moment given it is still relatively early in the season. Beneficials invariably play an active role in keeping aphid and caterpillar populations in check.”

Cesar consultant, Julia Severi, said oat aphids had a pear-shaped body and were olive-green to almost black in colour.

“They have distinctive rusty red patches around the aphid’s two ‘exhaust pipes’ or cornicles which are located toward the tail end of its body. The antennae extend about half the length of their body,” Ms Severi said.

“Corn aphids have an oblong-shaped, light green to olive-coloured body with two dark areas near the base of the exhaust pipes.”

Ms Severi said that while oat aphid and corn aphid were the two most prevalent cereal aphids in south-eastern Australia, rose-grain aphid could also infest most cereals and some grasses.

“Rose-grain aphids have green-yellow bodies with a darker green stripe down the middle of the back. At first glance they could be mistaken for RWA, however, the key is to take note of the aphid’s exhaust pipes. These are visible to the naked eye on rose-grain aphids but not on RWA,” she said.

See also the GRDC’s Crop Aphids Back Pocket Guide which has been updated and can be downloaded via https://grdc.com.au/CropAphidsBackPocketGuide.