THE Australian Oilseeds Federation (AOF) has forecast Australia’s 2018 canola crop at 1.96 million tonnes (Mt), down from 2.66Mt in its previous forecast released in July, with the cutting of crops for hay in New South Wales, South Australia and Victoria accounting for much of the drop. 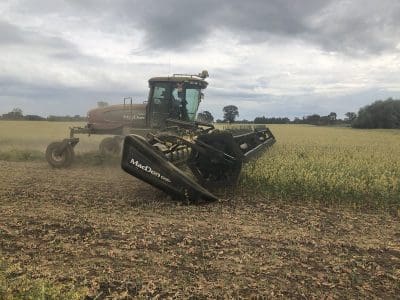 Canola being cut for hay at Cosgrove near Shepparton. Photo: Rhys O’Sullivan

AOF executive officer, Nick Goddard, said current estimates had indicated the national canola crop would be the smallest since 2009 which, like this year, was a drought year for eastern Australia, and had meant Western Australia could produce as much as 70 per cent of the national crop.

“There is a higher level of uncertainty for production in the eastern states due to varying estimates of the amount of area sprayed out, grazed or cut for silage and hay, in a very dry season where severe and widespread frosts reduced yield potential even further in many areas,” Mr Goddard said.

“The variability in yield potential across paddocks, farms and regions is huge, depending on whether crops could access deep subsoil water and/or the timing of an extra 20 to 30 millimetres of rain from storms.

“Any rainfall over the next two to three weeks will be critical to determine yield outcomes.

Due to the patchy and late establishment of the crop and the dry season, canola crops in general have not grown the biomass they normally would, and yield expectations for much of eastern Australia are below average.

On the positive side, there has been no heat shock stress on crops this season.

NSW has lost around 65 per cent of its planted canola area because of drought and spring frosts, which have resulted in large areas cut for silage and hay.

Production is uncertain and will depend on rainfall to fill seed and pods over the coming few weeks.

More than 95pc of the remaining crop for harvest is on the southwest slopes, southern and central tablelands, and eastern Riverina, which have received welcome rain in the past fortnight.

Following a patchy and delayed crop establishment, rainfall has been on average very low through most of the growing season.

For the second consecutive year, severe frosts in late August, followed by more frost in mid-September, made it easier for growers to decide to cut crops for hay that might otherwise have been kept for grain.

Late-season pest pressure has been high, and most crops will be sprayed for aphids and/or heliothis.

The green peach aphid has been widely present in crops, and observed feeding on the underside of pods.

This is unusual, and the aphid’s presence could point to the need for extra vigilance for next year’s crop should conditions be favourable for its survival over summer.

Grain quality is expected to be highly variable, with lower oil contents and smaller grain anticipated.

In Victoria, the harvested area is expected to be down by 55pc on the area sown.

Dry seasonal conditions and some moderate to severe frosts in August and September have impacted on crops in all areas apart from the state’s southwest, which has recorded average or slightly above-average rainfall from April to September.

However, September and early October have been very dry, and 20-30mm of rain is urgently needed to underpin current yield potential.

Area harvested for canola is down by more than one third from 240,000ha sown, and parts of the crop still standing may yet be cut for hay because of limited yield potential.

Seasonal conditions have been generally good in the Lower Eyre Peninsula and Lower South East regions, where average yields are expected.

Rainfall for April to September has been average or a little higher, but September rainfall has been well below average in these areas, and October has so far on a similar track.

The Mallee and Upper Eyre Peninsula will produce little, if any grain, while the Upper Mid North and the Upper Yorke Peninsula have sustained frost damage in late August and mid-September, resulting in significant areas being cut for hay.

Following a late start and slow emergence that reduced plant stands, the crop in Western Australia is overall set to achieve close to average yields.

Current estimates have production spread among the zones at 15pc for Geraldton, 25pc in Esperance zone and 30pc in both Kwinana and Albany.

Despite conditions being generally drier than normal in many areas through September, there have been no real heat stress events, and this has allowed crops with reasonable soil moisture to continue filling pods.

Frosts in mid-September have taken the top off yield potential across areas of the southern grainbelt, in particular the Lakes region, with low-lying areas suffering significant damage.

Windrowing has commenced on early-sown crops in coastal areas of the Geraldton zone, and is about to start further inland.

Many crops in southern areas have or will be sprayed for heliothis and/or a combination of aphids and diamondback moth.

Grain quality is expected to be good.